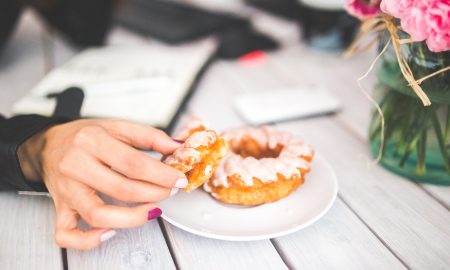 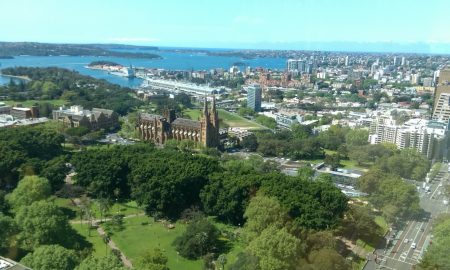 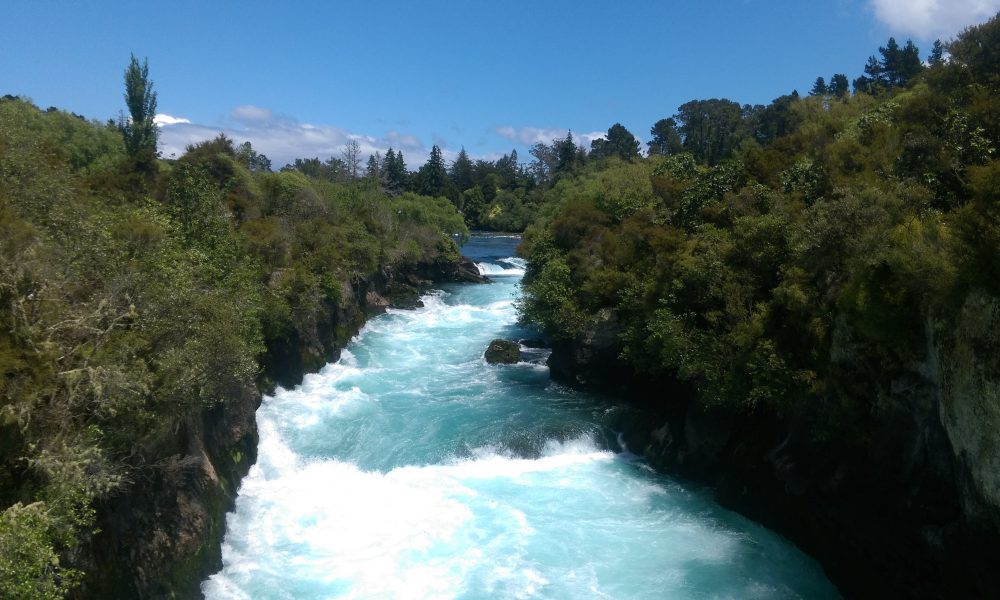 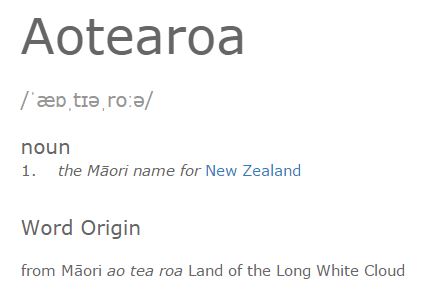 In pursuit of the land where nobody wears shoes, trolleys are referred to as “trundlers” and where hearing a deafening air-raid siren is apparently no cause for alarm, Roxanne and I made it to the airport not long before midnight and had a nice sleep on the floor awaiting our flight at 8:45am the next day. We flew Sydney to Auckland, with twenty days of travelling ahead of us.

Starting in Auckland, we stayed in a hostel for a night, which made a nice change from the night before (and also a fair few nights afterwards) before picking up our car-tent.

While in Auckland though, we decided to climb Mount Eden, a volcano which hasn’t erupted for 28,000 years. From the peak, there’s great views of the whole city, and you can look down into the crater too.

The crater of Mt. Eden with the Auckland skyline, you can see the famous Auckland Sky Tower too.

Of course, the only option at this point was to request an Uber. We got an Uber to return us to the city from the top of a volcano.

You’re quick to realise just how beautiful a place New Zealand is. I remember mentioning how beautiful I thought it was, then looking around and saying “even that tree is beautiful!” 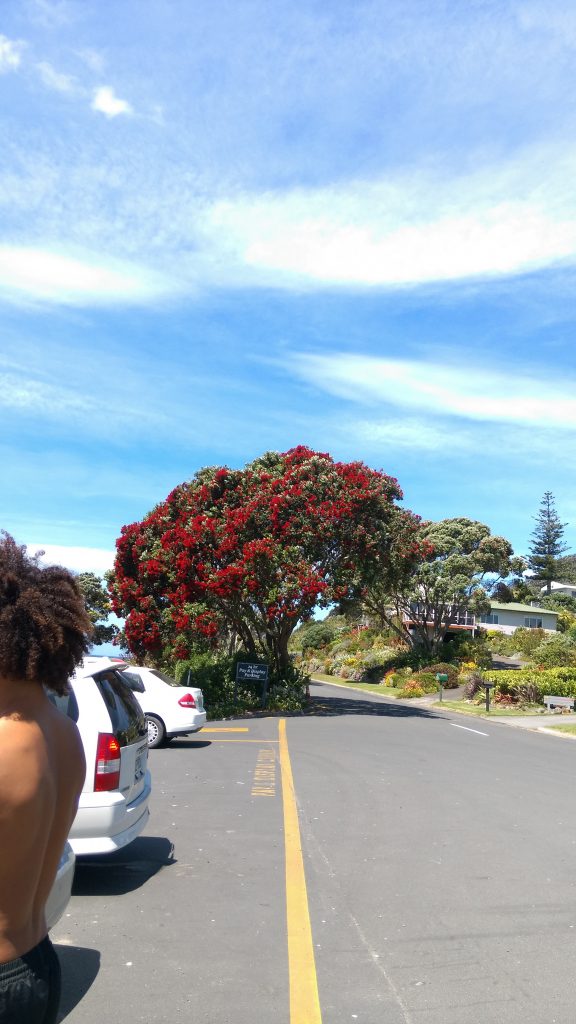 Next, we made the drive up the Coromandel peninsula, which is point B on the map of North island above. We had a nice hike to Cathedral Cove, which you may recognise if you’ve seen…

-Narnia: Prince Caspian, where the Pevensie kids first find themselves upon their return to Narnia. Luckily they managed to clear the beach for the shot, which is something we had a lot of trouble with to get our photos.

-It’s also where Ray Dalton gets a haircut in “Can’t Hold Us”, a music video by Macklemore and Ryan Lewis. I’ve set the link below to start the video just at the right moment (to avoid putting you through the pain of listening to Macklemore).

We were lucky enough to see a stingray in the ocean here just having a nice little swim up the beach, but unlucky enough to miss the prime bathing hours at Hot Water Beach. 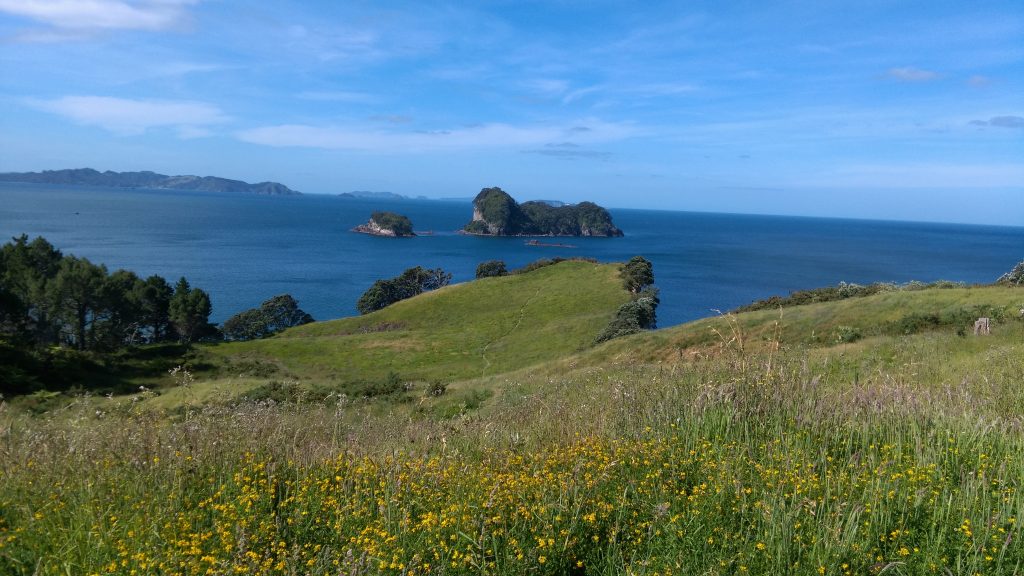 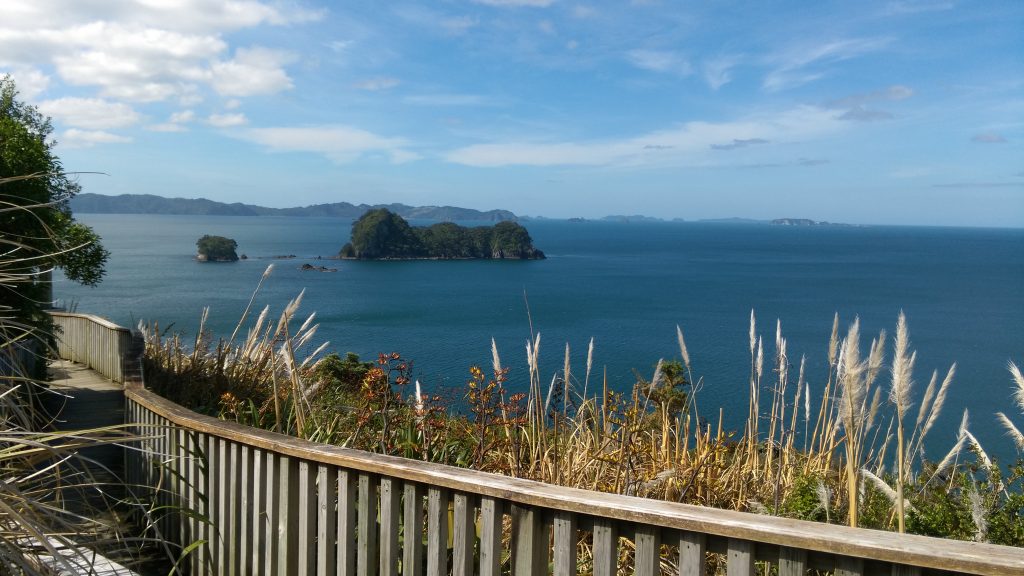 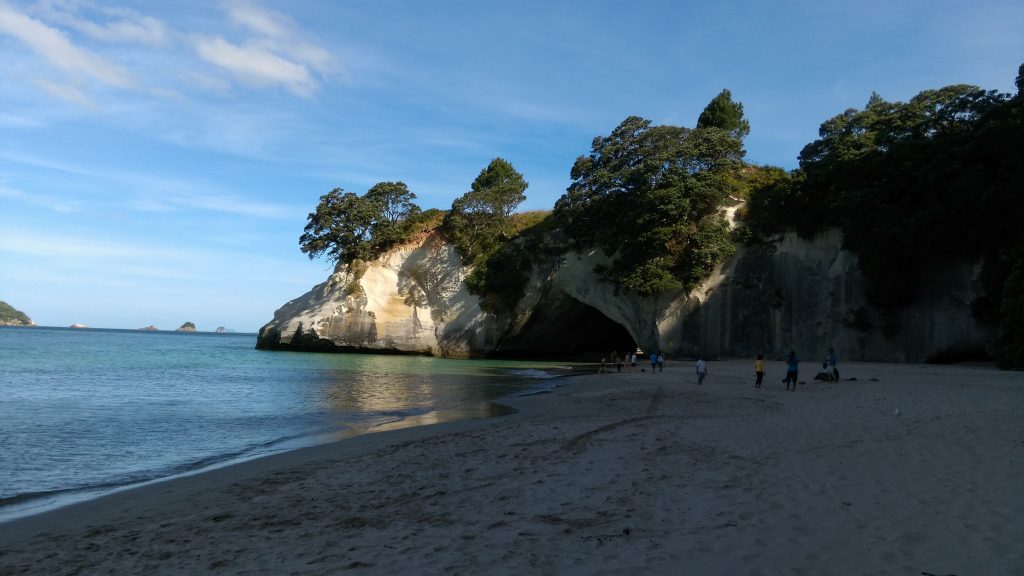 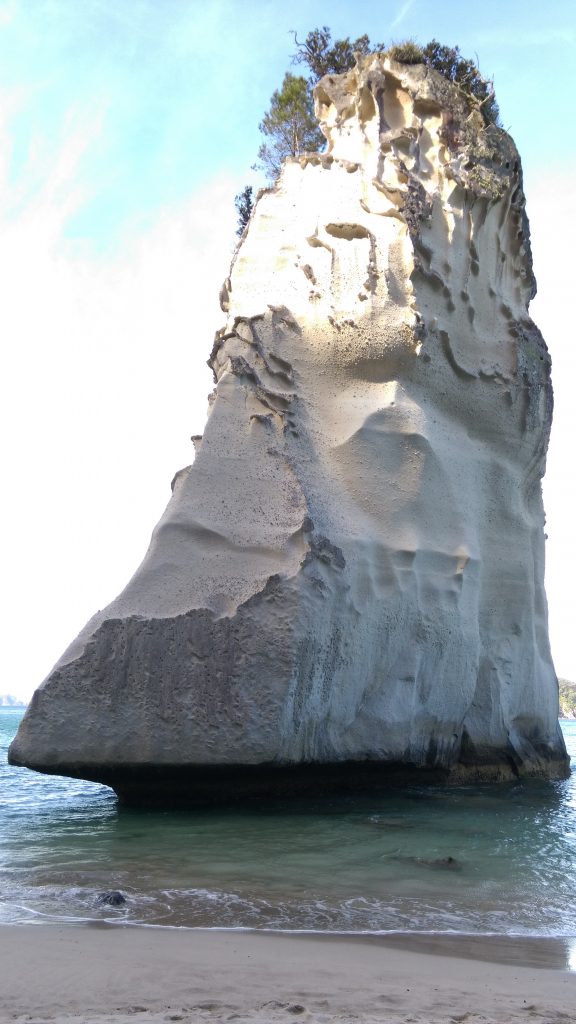 Later that day, we made it to the first of many nowhere-towns we’d visit over the next two and a half weeks. Thames, population 7,000: and it was still the second largest “city” in New Zealand at one point in history. Nothing going on here, but we needed somewhere to sleep. A while past midnight, we parked up in a car park where camper vans were allowed to stay. Tents though? Not so much, as we’d find out at 7am, with a knock on the tent, and a lovely $200 fine. Smashing.

That didn’t curb our enthusiasm, though it was the last time we squeezed four in the tent at once, using the front seats of the car as well in future. We began day three with a nice long walk at Karangahake Gorge, through the ruins of an old mine. 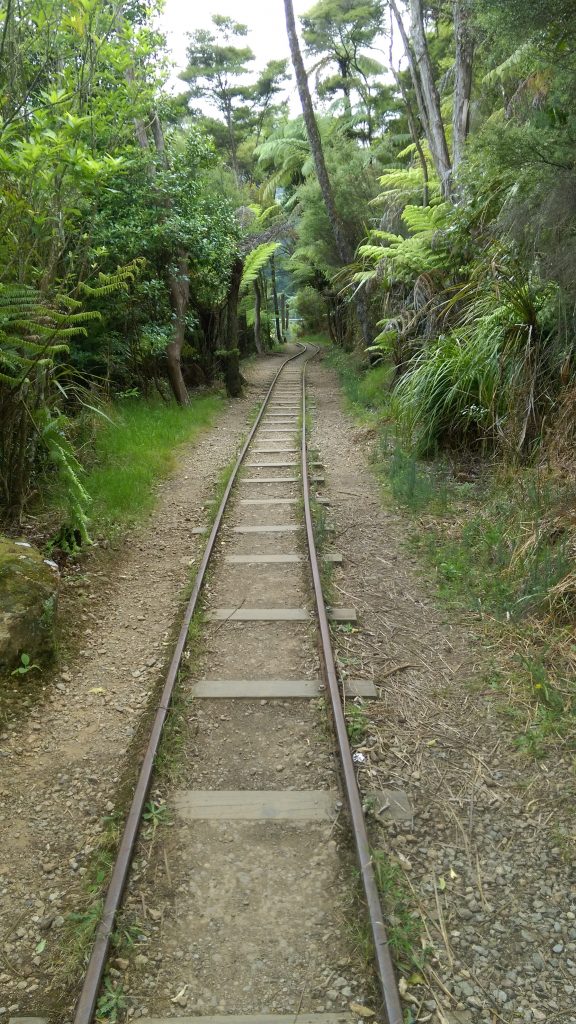 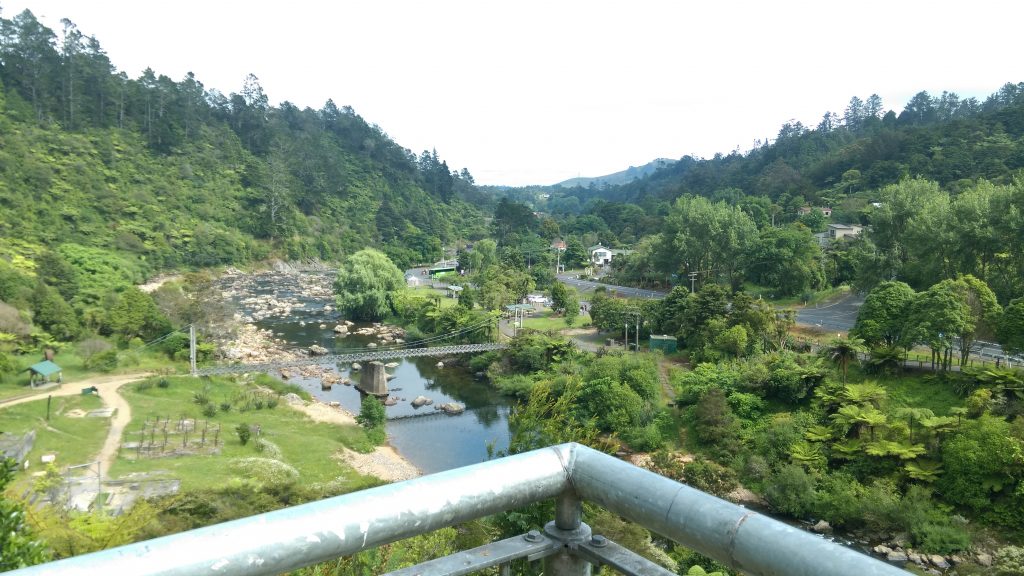 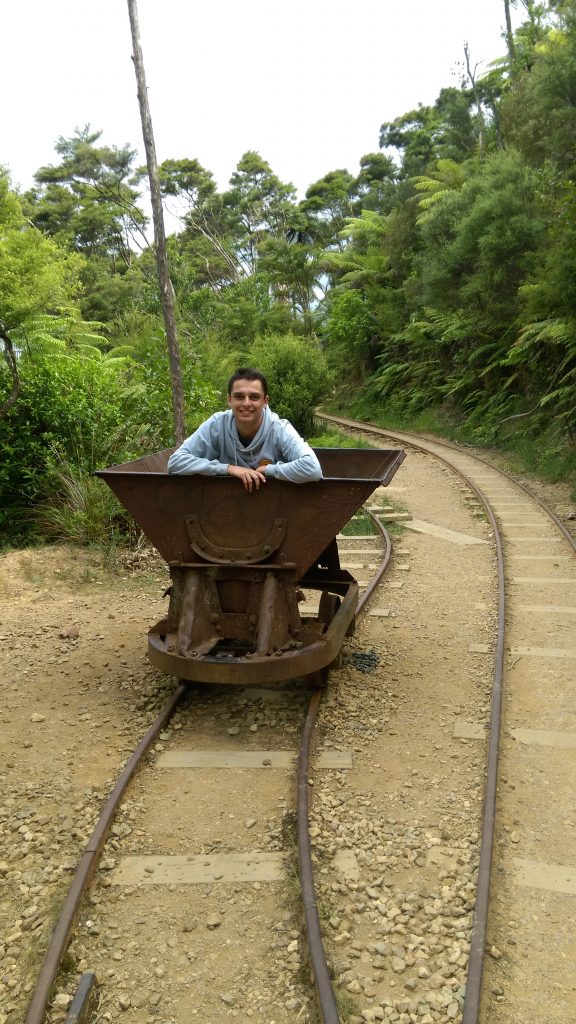 That same day we visited Hobbiton, the studio tour of the Lord of the Rings and Hobbit film franchise. We all thought it was one of the highlights of the entire trip, getting to see all the tiny hobbit holes used to make Gandalf look tall, and the larger ones used to make Frodo and the rest of the hobbits small. The scenery was excellent, as was the free hobbit drink at The Green Dragon at the end of the tour. It’s location in Matamata, which they managed to keep secret for quite a while, has been built up so much for the sole reason that tourists visit for the studio tour. 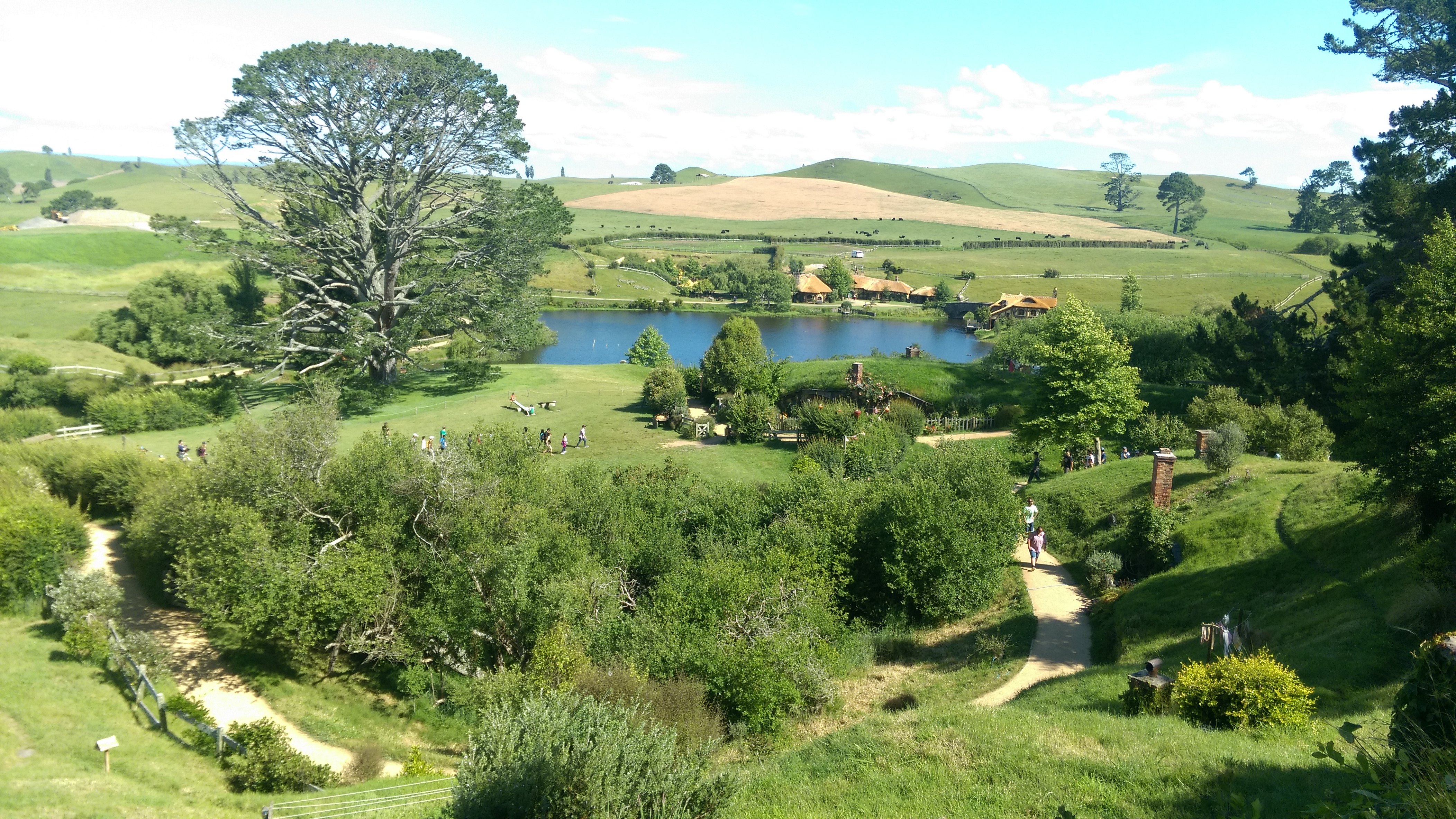 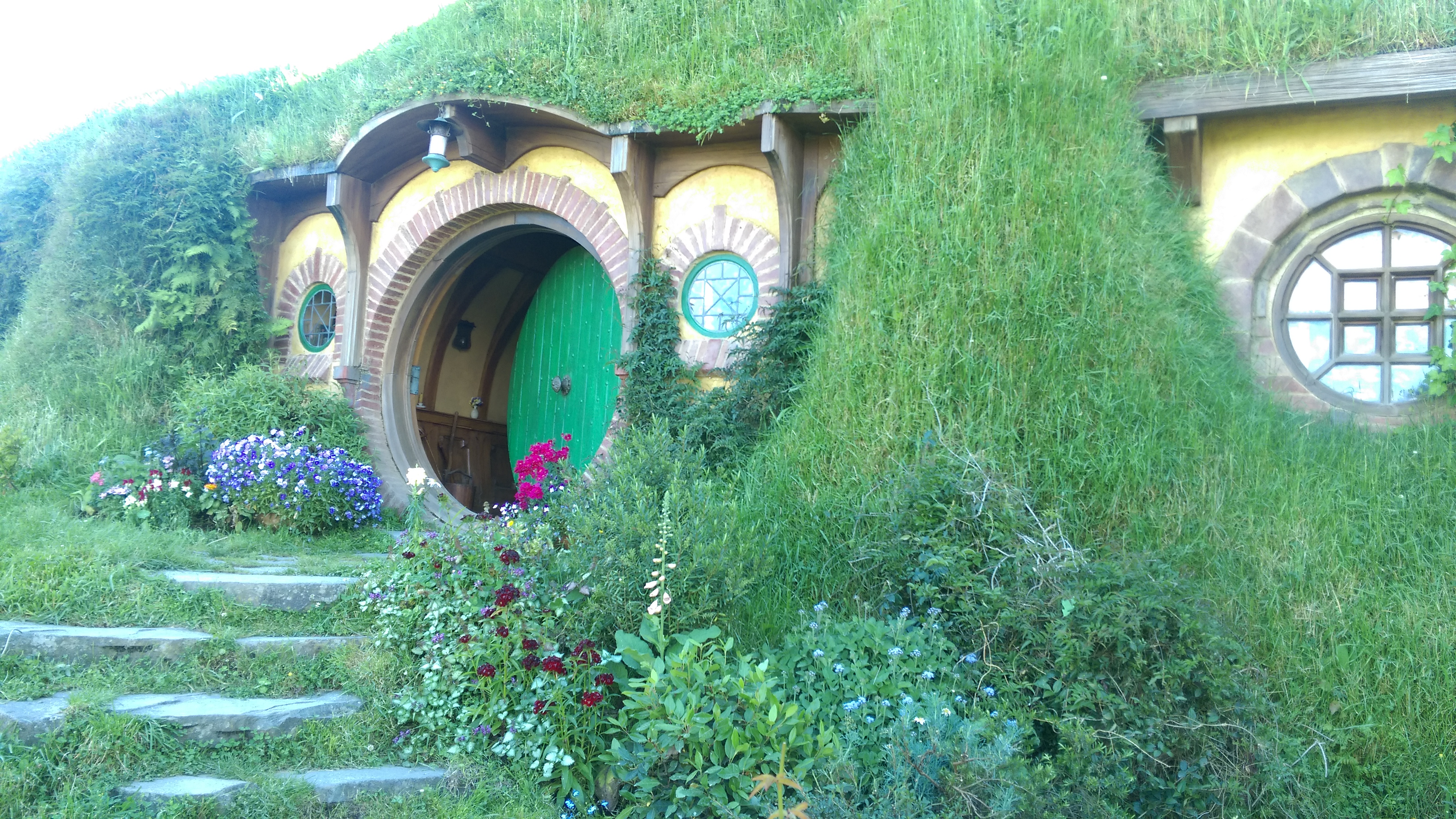 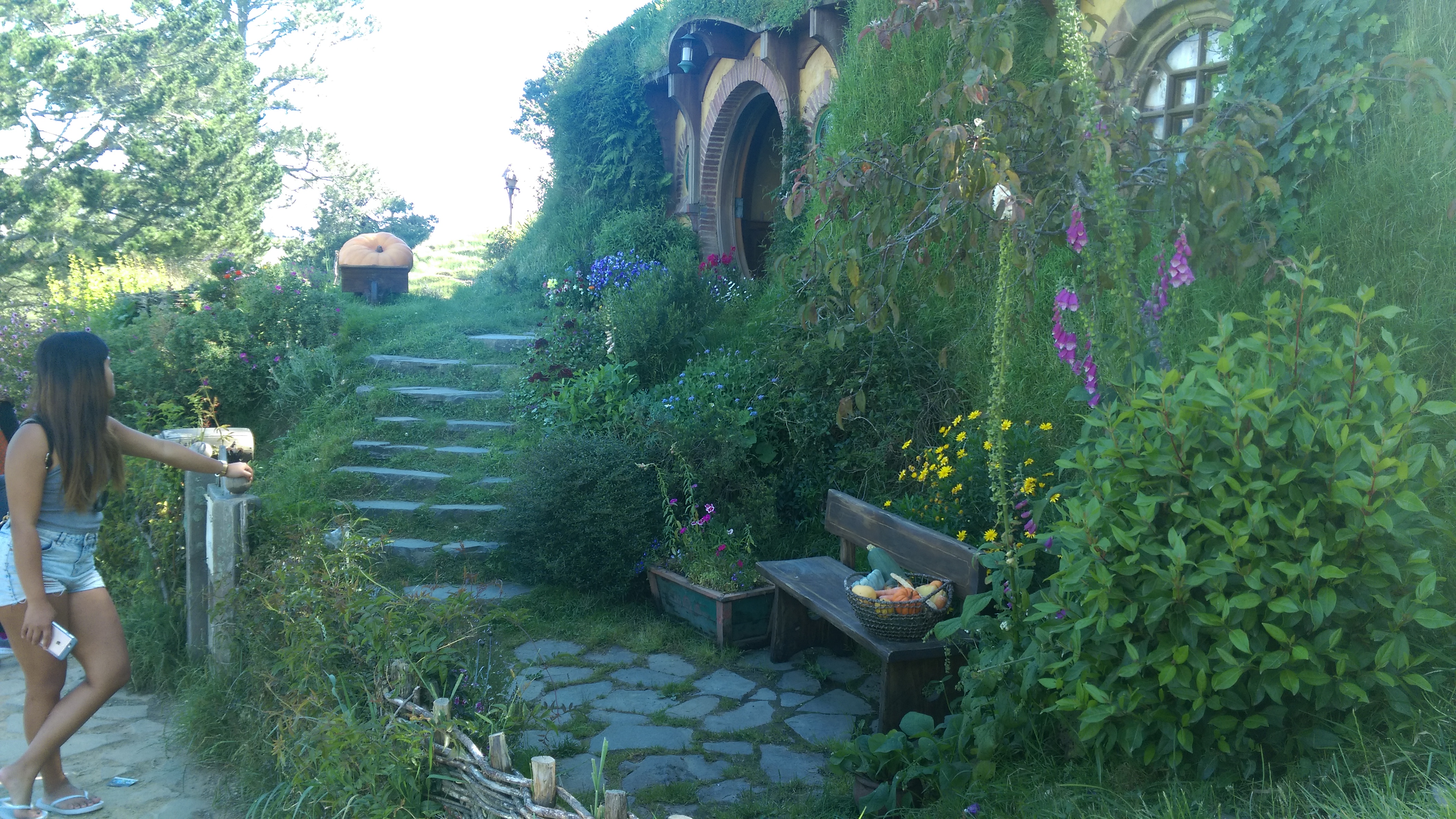 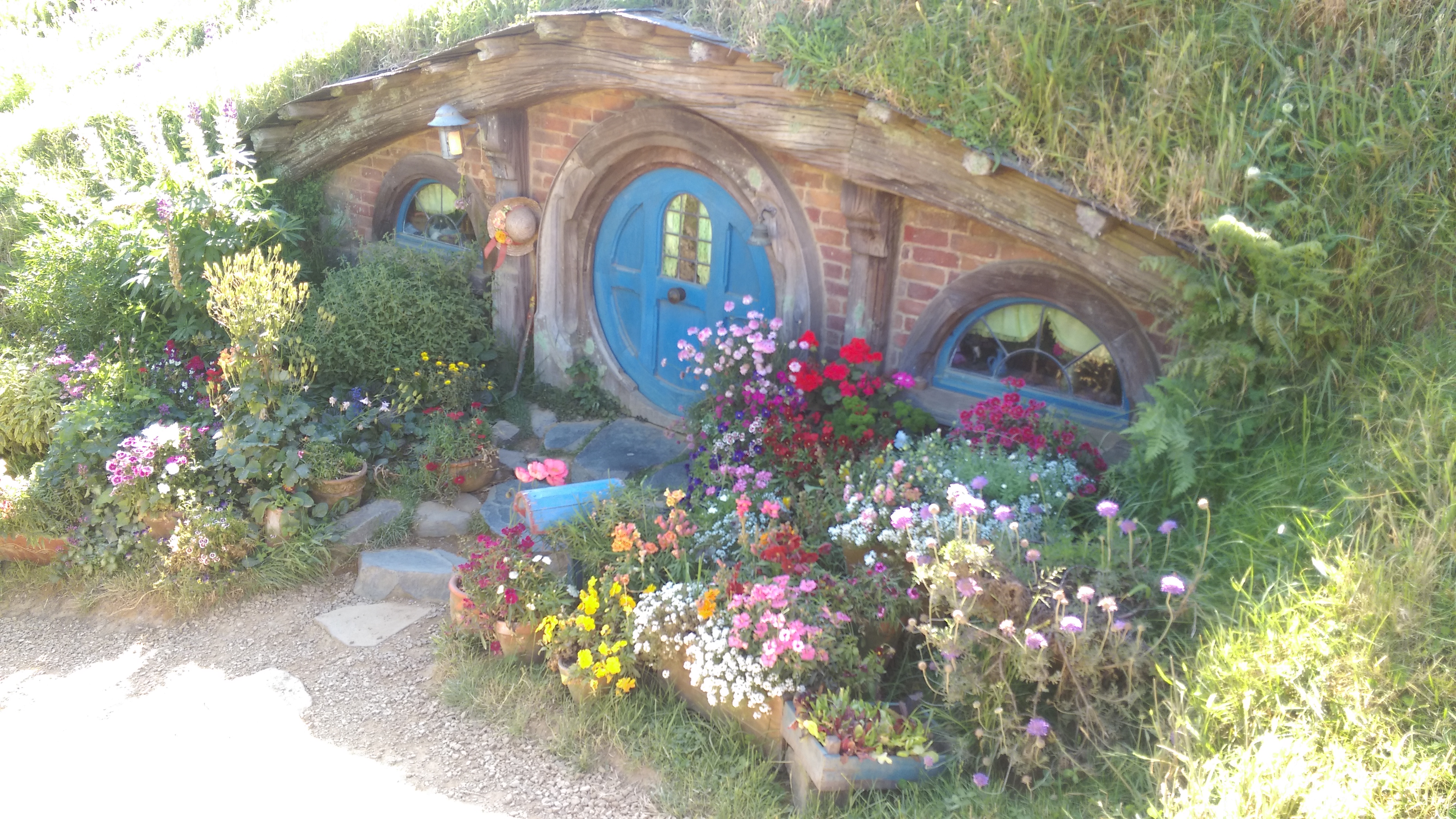 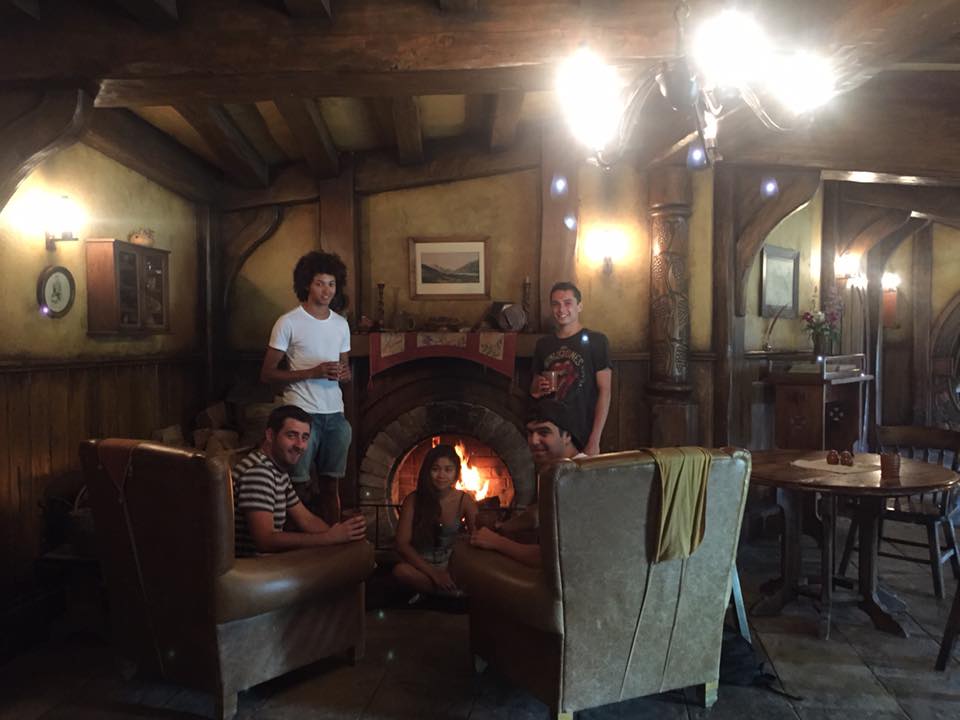 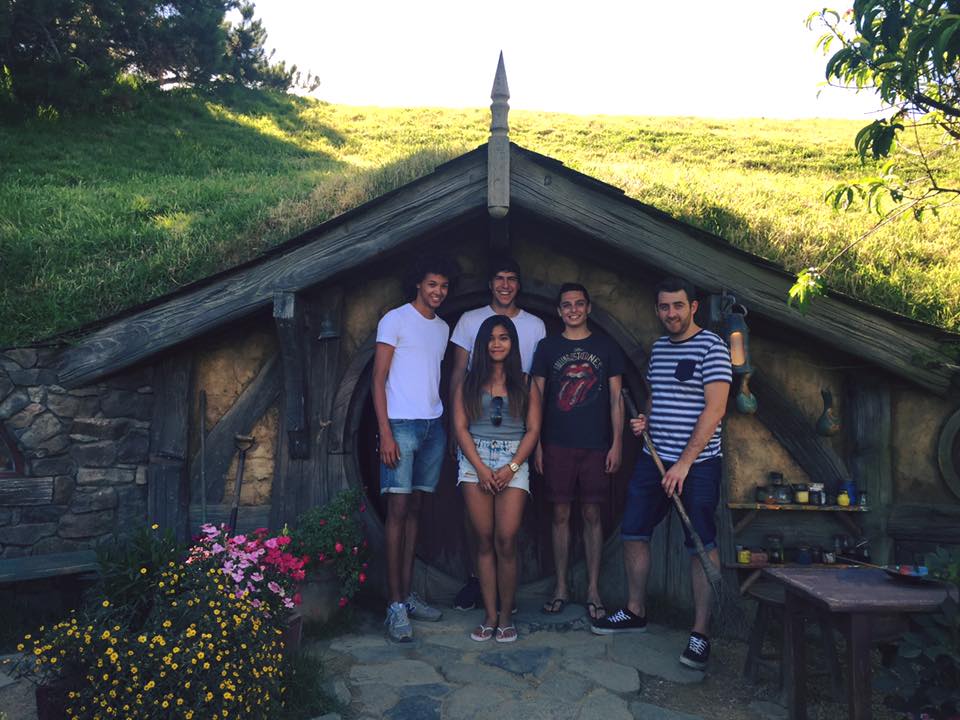 The next two days of our trip were spent struggling to breathe, as we visited Rotorua, boiling mud pools, and thermal lakes of hydrogen sulphide, which smell of rotten eggs. Anyone who has attended secondary school biology, or had a stink bomb set off in their vicinity can relate.

We also visited Redwoods and woke up on day five with the beautiful view of Lake Taupo, which is so big that the entirety of Singapore could fit inside it.

That day, we did a killer walk across the Tongariro Crossing, a mountain range which is the home of Lord of the Ring’s famous Mount Doom, more commonly known as Mount Ngauruhoe. It was a good, if tiring, walk with some fantastic views. Worth it, but I’d think twice about doing it again, and wouldn’t recommend it to anyone with a fear of heights. However, the silence you hear when you stand still is like nothing else I’ve ever experienced. You can see for miles, and you can hear nothing at all. It’s the quietest place I’ve ever been. I did manage to fall asleep behind a rock on this walk though, and burnt my nose which developed into a very uneven tan (only recently evening out). 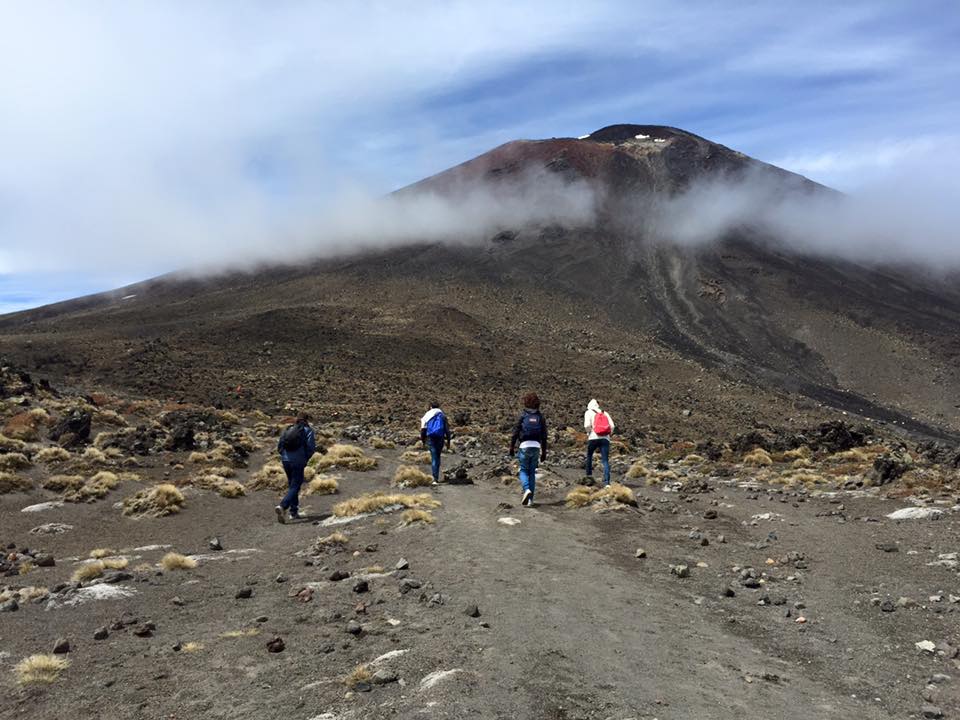 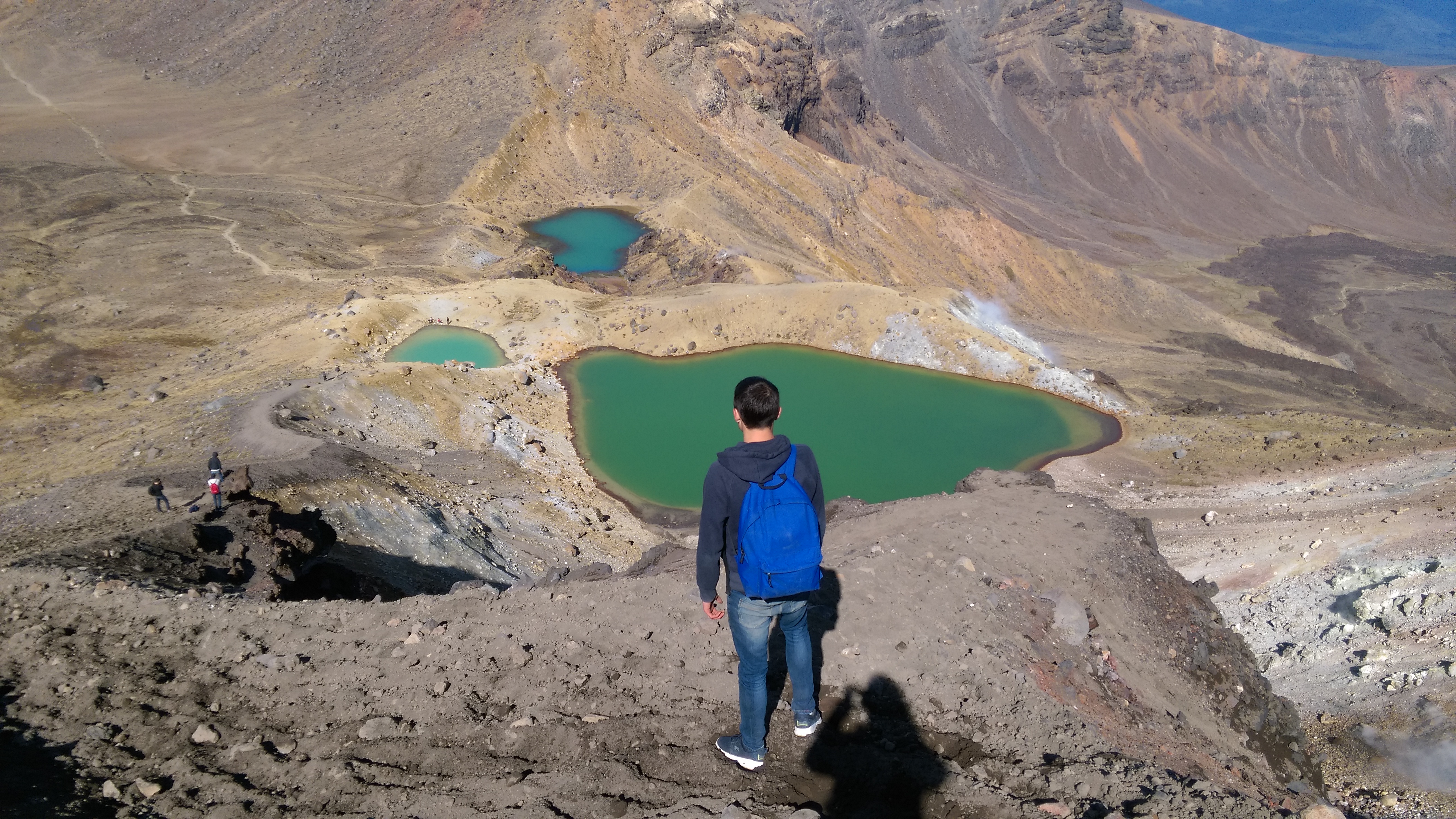 Our final day on the North Island was spent at Waitomo, a tourist town known for its caves. Waitomo, in the Maori language, is literally “water hole”, but what’s so special about it is the millions of glow worms which make it their home. In the tour group, we stood in the same spot as The Beatles, Katy Perry and many more before us, and the tour guide requested that the group sang Happy Birthday to whoever had the closest birthday, which happened to be me, so that we could hear the echoes at the “cathedral”, or the tallest point of the cave. It was a nice touch.

Afterwards, we had a long drive down to Wellington where we stayed the night and walked around. With a population of 400,000, London has 21 times as many people, and it’s also only a third the  size of Auckland, despite being the capital. Personally, I found it quite unwelcoming, very hipster and also not very exciting, so I wasn’t too upset to leave it behind the next day. We stayed in a hostel, and so had a bed for the first time in a few days, which was very welcome. We then got on a ferry to take us to the South Island. 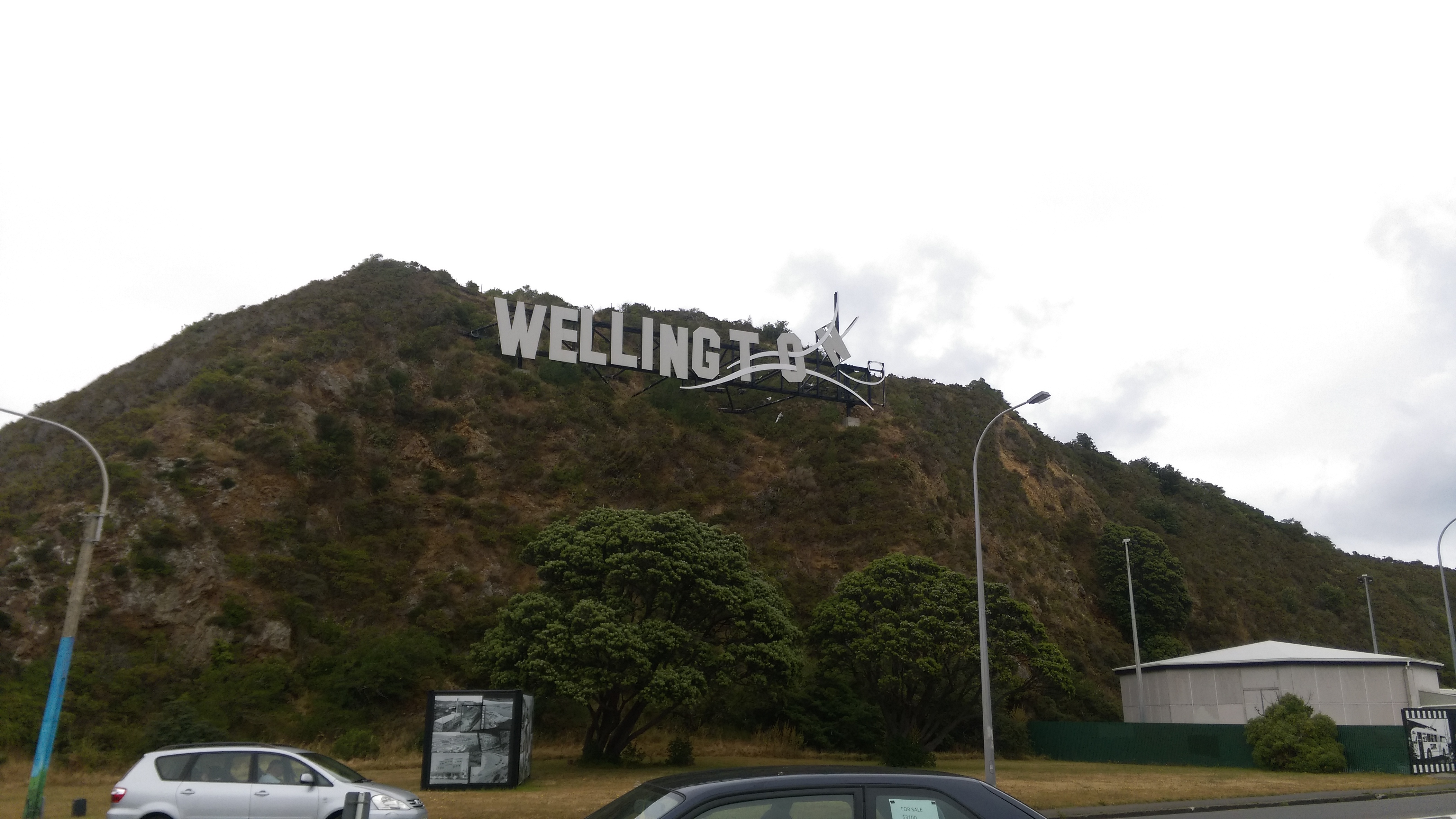 We briefly visited Lake Rotoroa, the Buller Gorge swing, and also saw some black swans. We all thought they were fictional. We also had an embarrassing experience which will teach us never to sit down in a restaurant before looking at the menu to check its prices. More interestingly however, we went to see Pancake Rocks, a beautiful cliffside setting which has formed in such a way that trumps science. We have no idea why it’s developed to look like stacks upon stacks of pancakes.

Franz Josef and Fox Glaciers were next on our list…

Seen those stock images of lakes which perfectly reflect their surroundings? Chances are you’ve seen photos of Lake Matheson. We had a walk through its national park, and settled on a little dock as a relaxing viewpoint. Finishing the day in Haast, a town we’d seen road signs for for miles and miles up the country, we realised it is completely empty. With less than 300 people living there, we parked up by one of very few buildings with a huge sign on its roof which said nothing more than “FOOD” for dinner. According to Wikipedia, the local school has 21 students, and the nearest secondary school is 85 miles away. This wasn’t the first point in the trip I said to myself, no matter how beautiful New Zealand is, I couldn’t live there. There’s simply not enough going on! 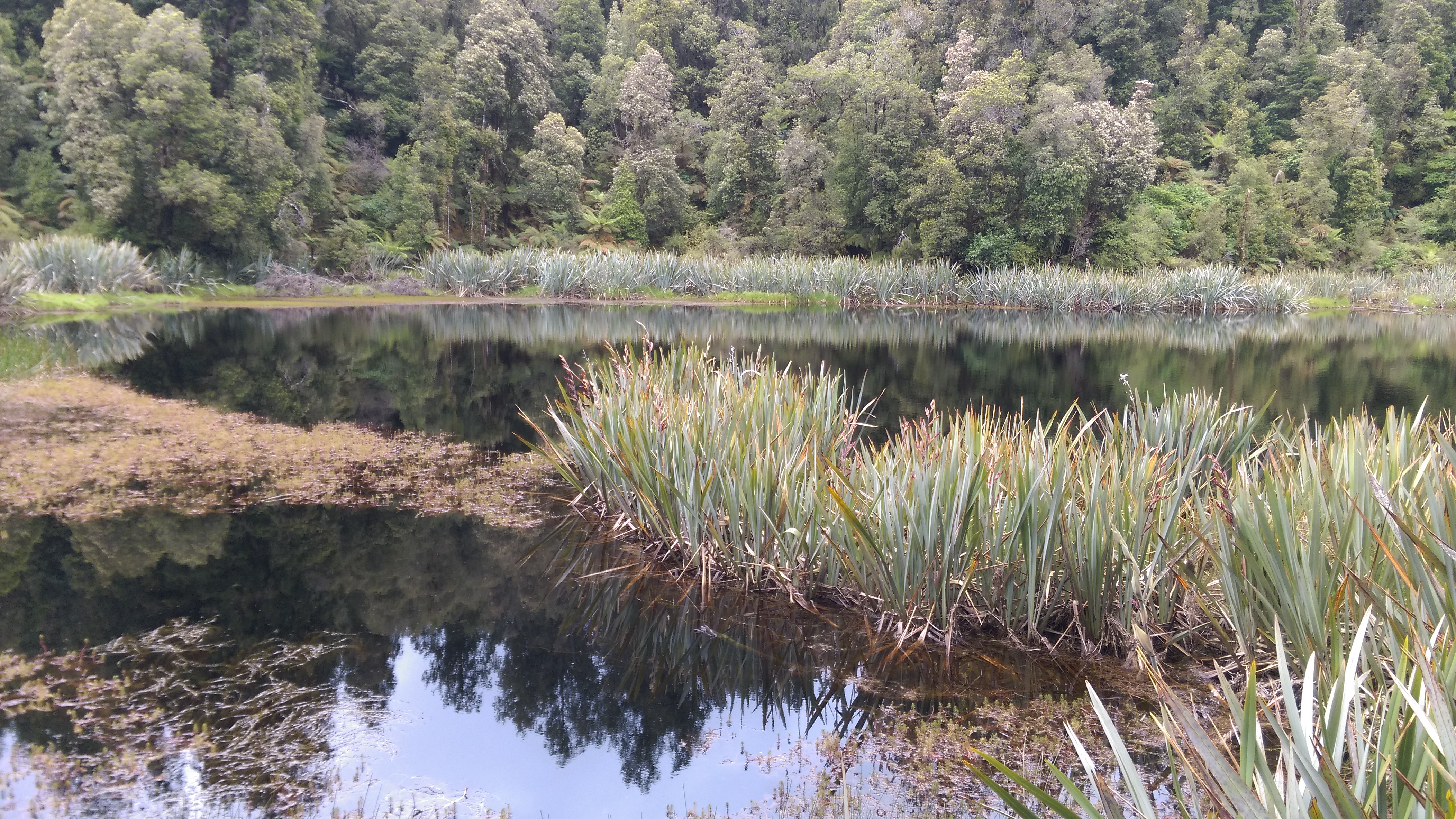 One of my favourite parts of the trip was Wanaka. It’s another small town built around a lake which we sunbathed by with amazing views of snow-capped mountains in the distance. It’s also home to a very famous tree, known as the Lone Tree of Wanaka, which is a single tree growing inside the lake. It’s not hard to tell why it’s such a popular point for tourism and photography. 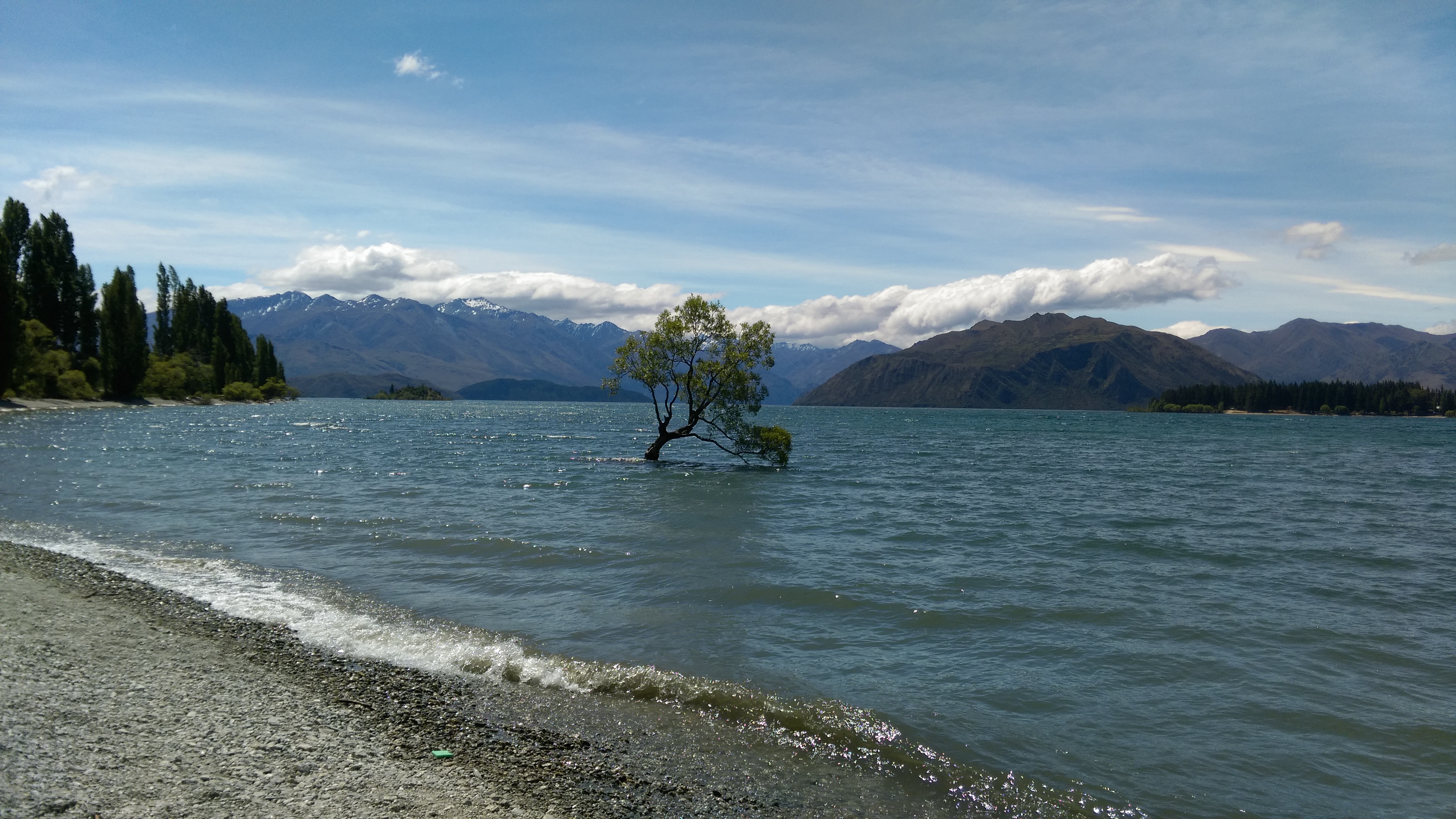 Wanaka is something of a tourist town, so naturally we also visited the cinema. It was definitely a shock to the system to find that the cinema was so tiny and full of couches rather than “traditional” fold-down cinema seats. They also paused halfway through the film (we saw Legend, about East End gangsters, 8/10 recommend) for an intermission! Another cool thing about Wanaka was its house of illusions. We killed a few hours here in rooms designed to completely throw your balance, and trying to escape “the world’s most enjoyable maze”.

Queenstown was one of our final destinations, and also the place in which we spent the most time. In part, this was due to the fact that we spent Christmas here. Like Wanaka, it is based on some beautiful lakes and mountains, and while it’s smaller than any of New Zealand’s major cities, it’s huge on tourism, especially for watersports in the summer and skiing in the winter. 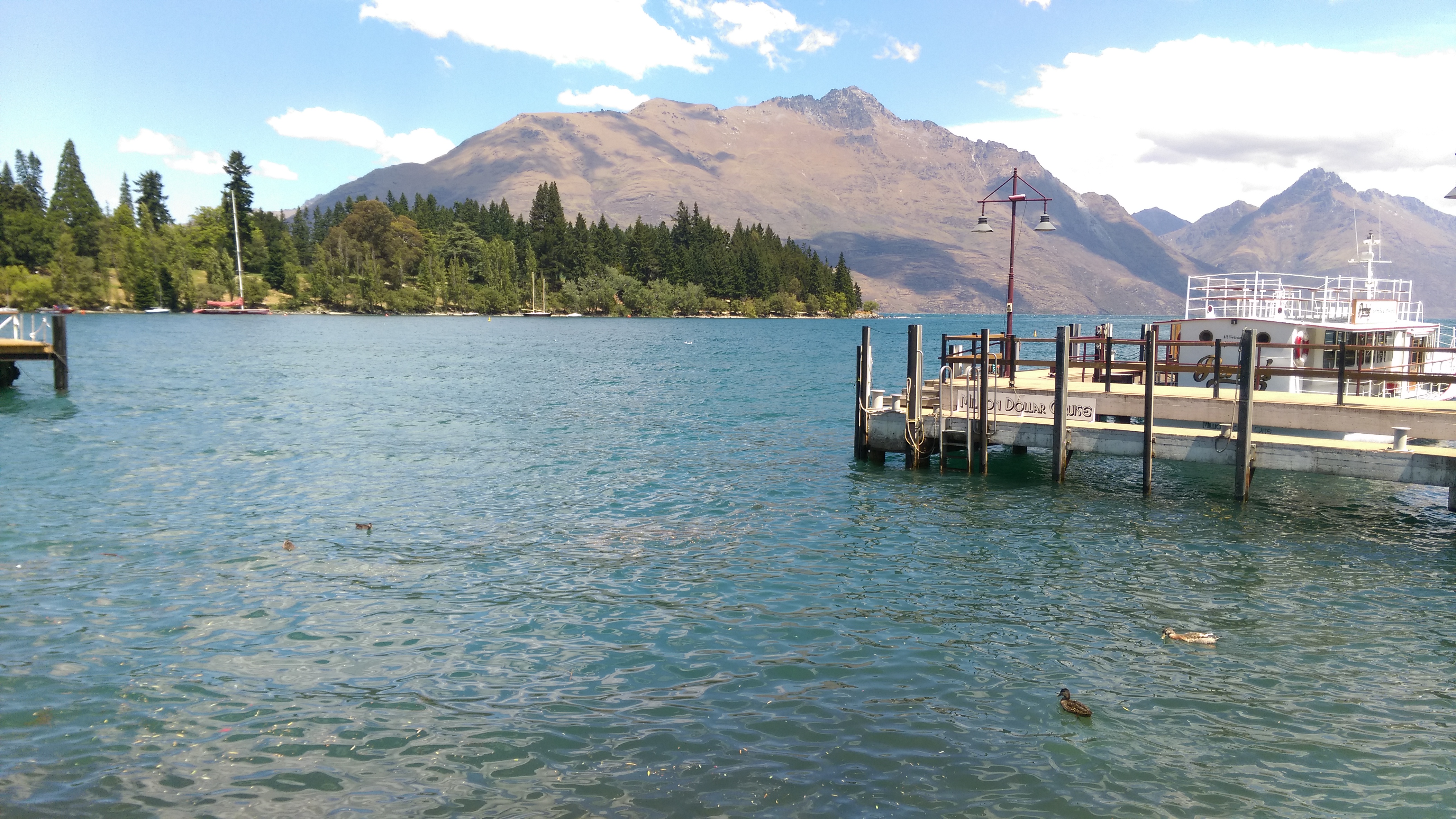 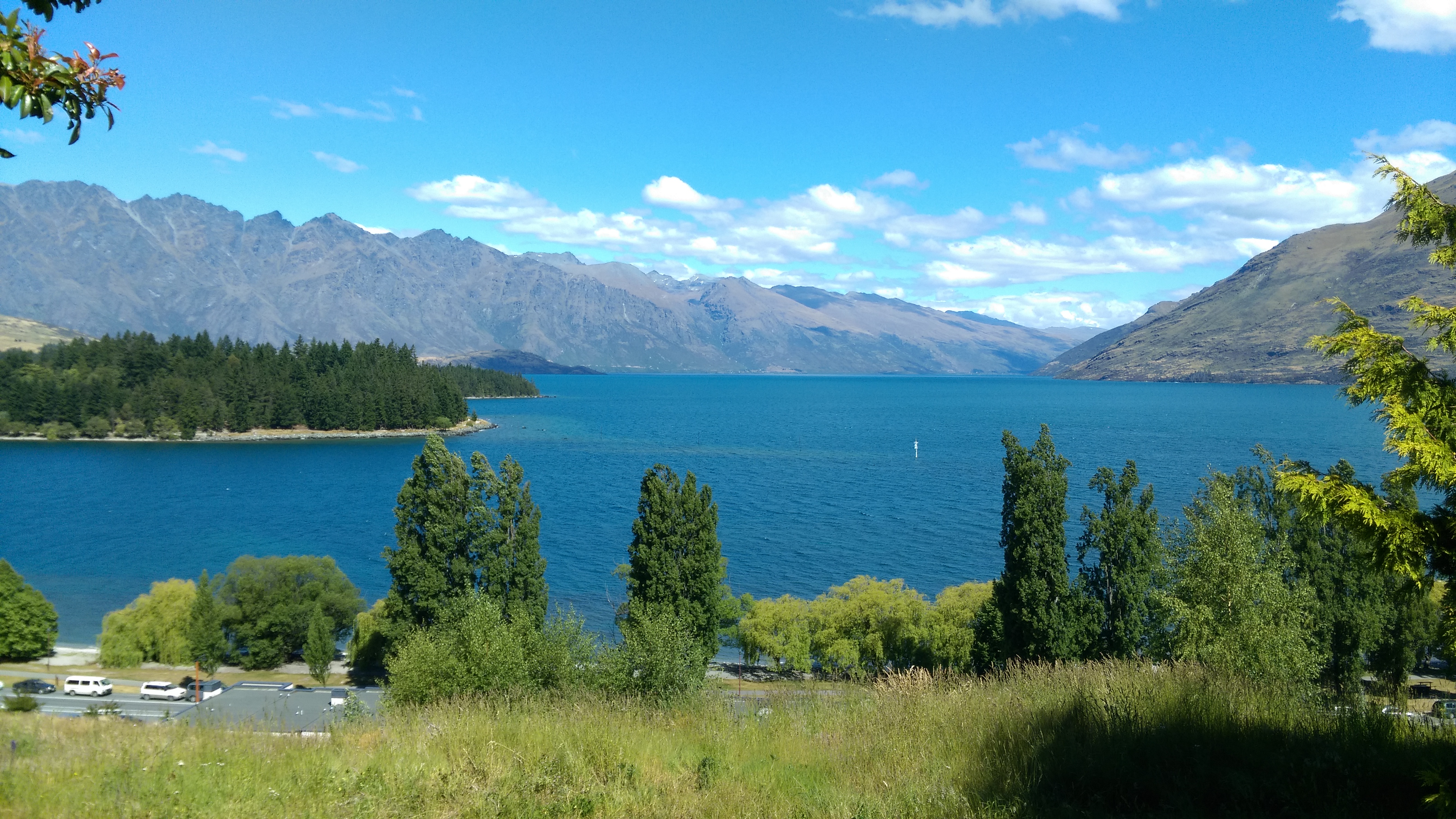 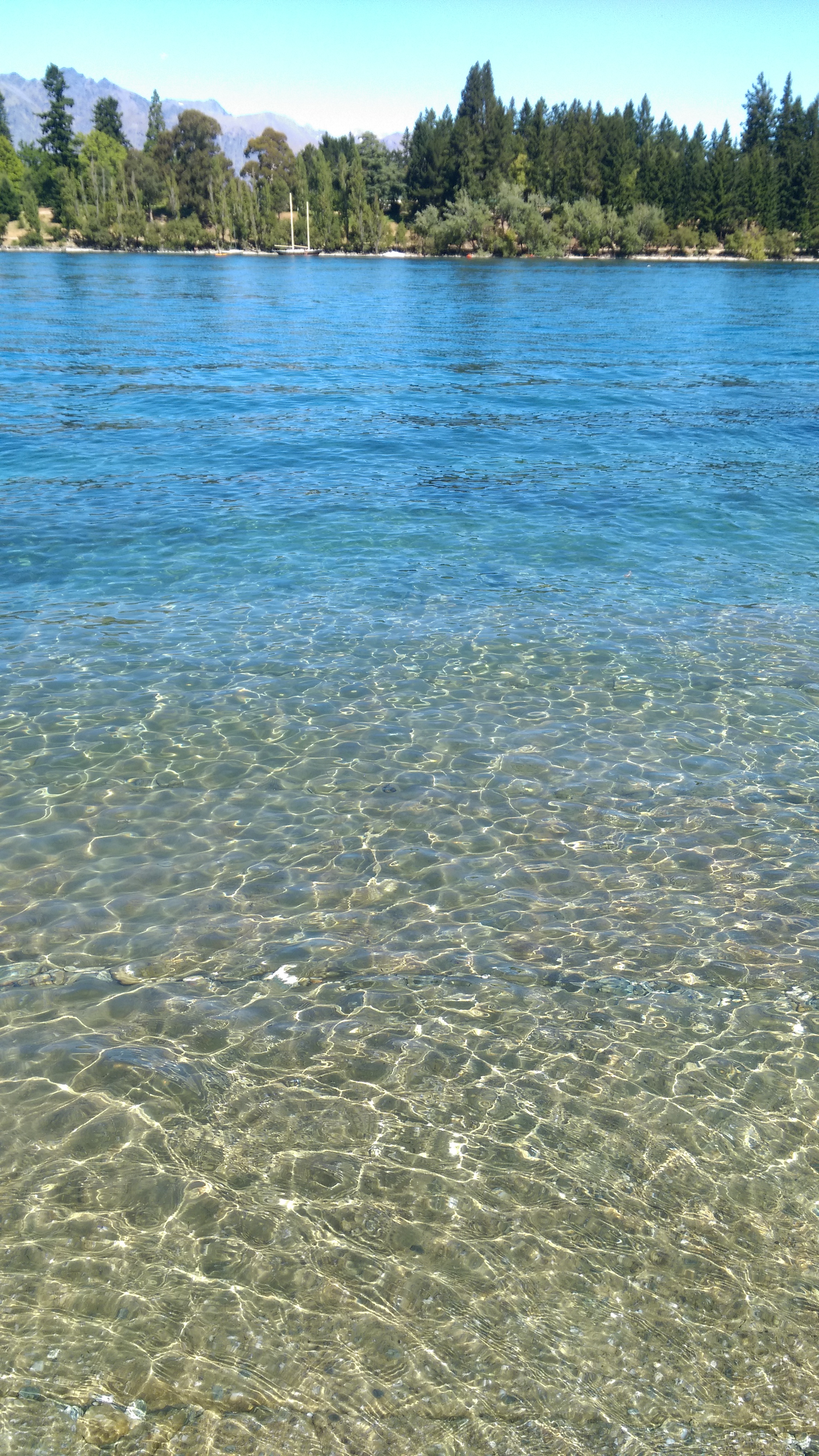 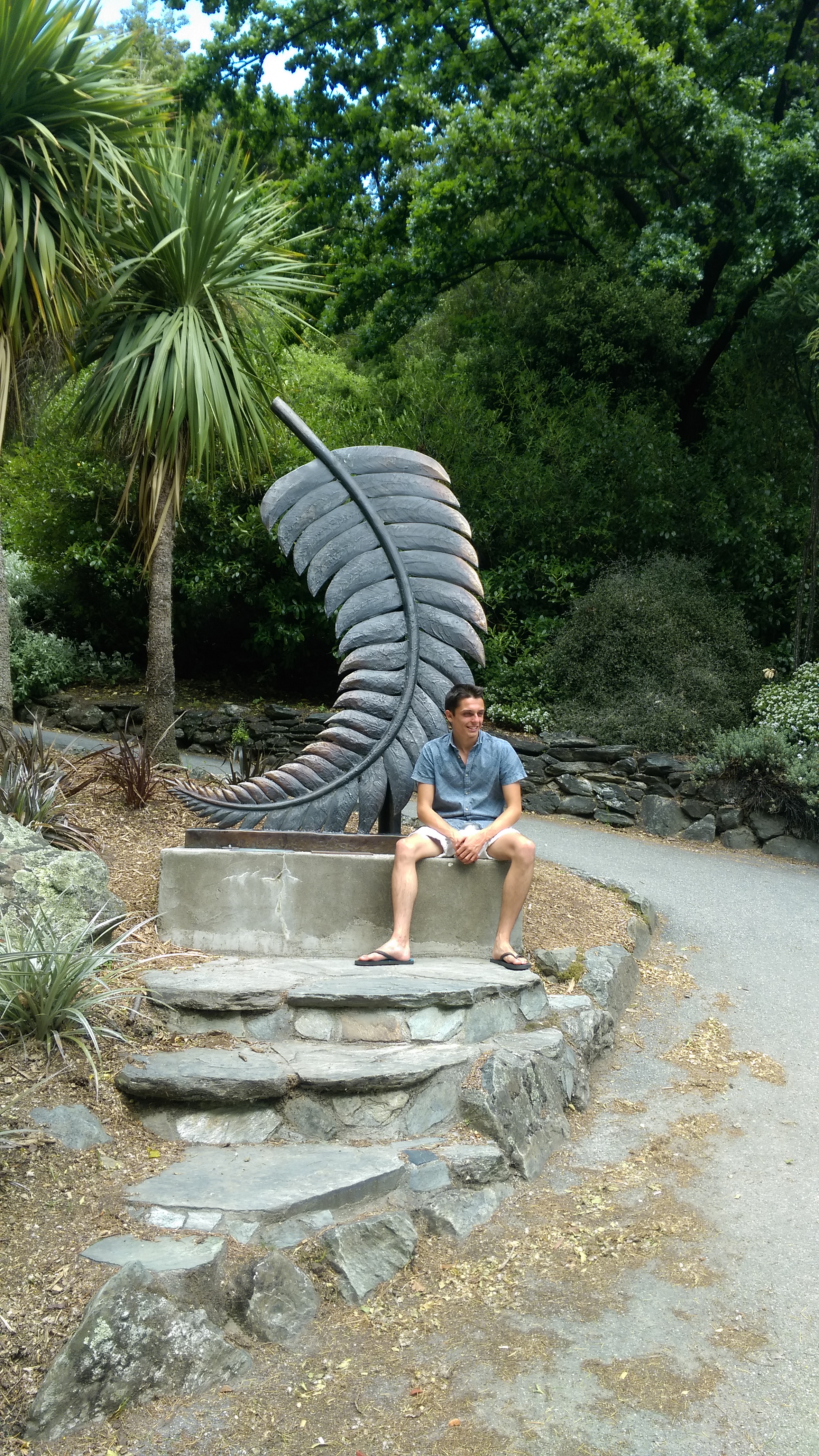 With its beautiful town and the amazing weather we had here, this is where we decided to relax. Arminas did his bungee jump,  we relaxed by the water and heard some fantastic buskers. Highlights included the world-renowned Fergburger, seeing Star Wars at the cinema (which was a bit more normal to us than the Wanaka cinema) and the luge ride at the top of the mountain, which was a hell of a lot like real-life Mario Kart!

On Christmas Day, we made a Christmas dinner at the beautiful lodge we stayed at, and played Monopoly over a few drinks (I won). After the intense travelling, it was nice to sit back for a few days. 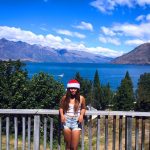 On our way to Christchurch, we visited Mount Cook, which was a bit of a re-tread towards the same area as the glaciers, but definitely worth it for the views.

Then finally, we spent one day in Christchurch, the city which was destroyed by an earthquake in 2011 from which it hasn’t recovered so well. Some buildings are yet to be rebuilt, there’s almost nobody on the streets whatsoever, and everything is closed by six o’clock. It’s slightly eerie. It was a city which had just overtaken the size of Wellington’s population, but now so many people have moved away. We flew out the next day, back to Sydney. 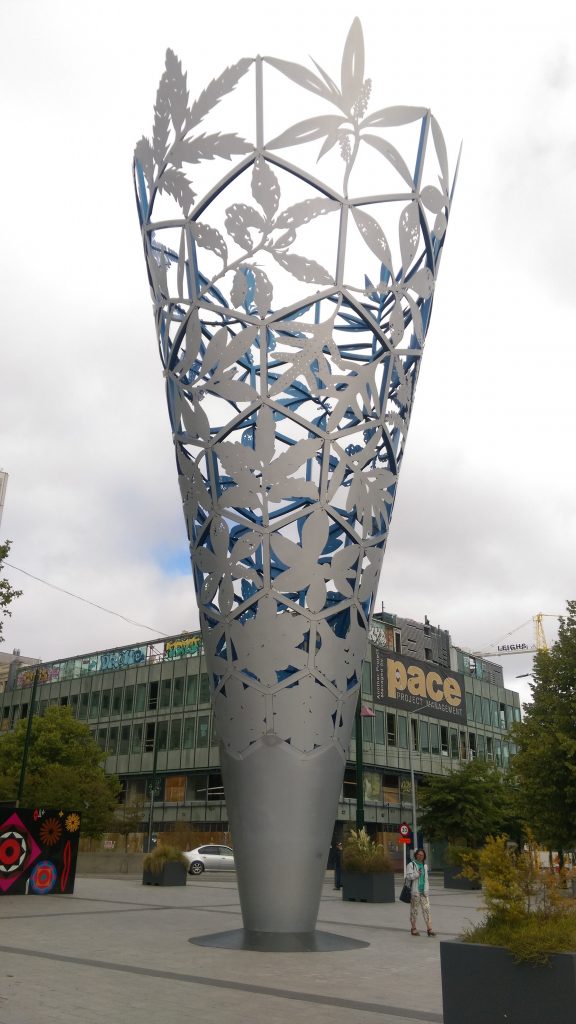