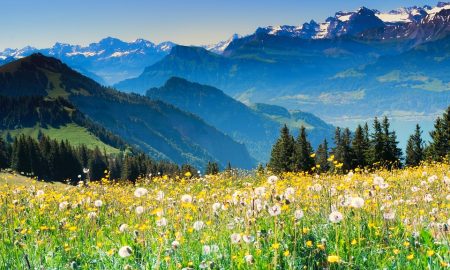 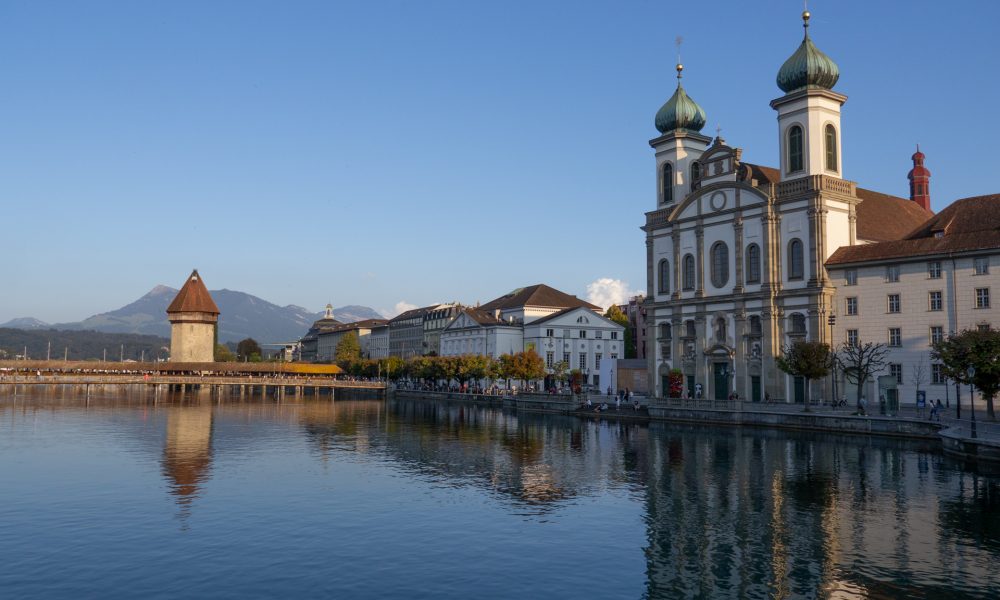 As one of those humans who doesn’t actually like beer, I was as surprised as everyone else around me that I agreed to go to Oktoberfest this year. Of course, as with most of my seemingly-odd trips, I had an ulterior motive. I hadn’t taken a European jaunt in some time, as I’d neglected it in favour of far-flung places in central and south-east Asia, as well as North America. In fact, the last time I bothered to travel in Europe was when I visited Austria in 2016. So Oktoberfest felt like a good opportunity to hit up some cool places en route. Based on the fact it was cheaper to fly in to any of the other surrounding countries (I’m talking £11) – and travel by land across the border into Germany – than to fly directly to Munich, it became a bit of a dice-rolling exercise as to how I’d make way in and out of the country. I opted for in via Switzerland and out via Austria – that satisfying combination of both expensive and expensive. An exhausting, whirlwind trip where 50% of time was spent trying not to fall asleep on public transport and the remaining 50% thinking about the fact I’d nodded off thinking about trying not to fall asleep, here are some of the highlights from my 72 hours in Switzerland.

Split into the old and the new, Zurich is fresh and vibrant city. For me, however, it was the old town that best flaunted its character. The narrow, colourful streets are pathed with modern boutiques and old-school shops, with a plethora of dining options thrown in along the way, including some whose sole purpose was to serve either muesli or cheese! It was oddly quiet when I visited, which allowed me to take my time and really explore the nooks and crannies. 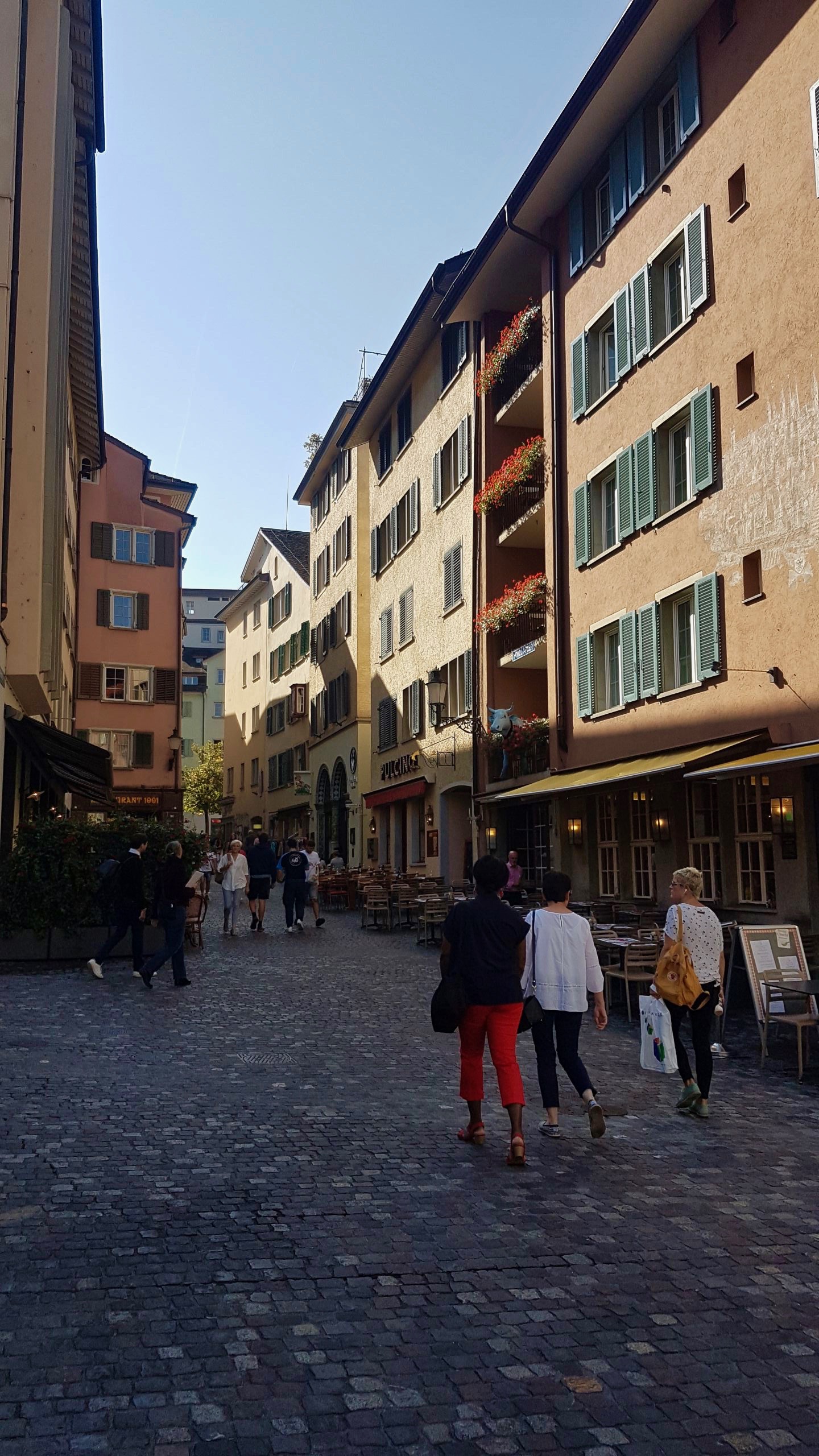 I adored the architecture in this part of town. Some of it dates back to c. 12thcentury, but it collides with the new and it’s quite extraordinary. But what’s the way to see it? Well, my advice is to head on up to Polyterrasse, the Federal Institute of Technology and Zurich University. From here you step out onto the spacious terrace and can take in views across all of old town, set to a backdrop of rolling hills. You can also flip reverse things and make your way up to Lindenhof, a viewpoint on the opposite side of the river that will give you an exquisite view across said river, which, for the record, is ridiculously blue! It’s stunning. 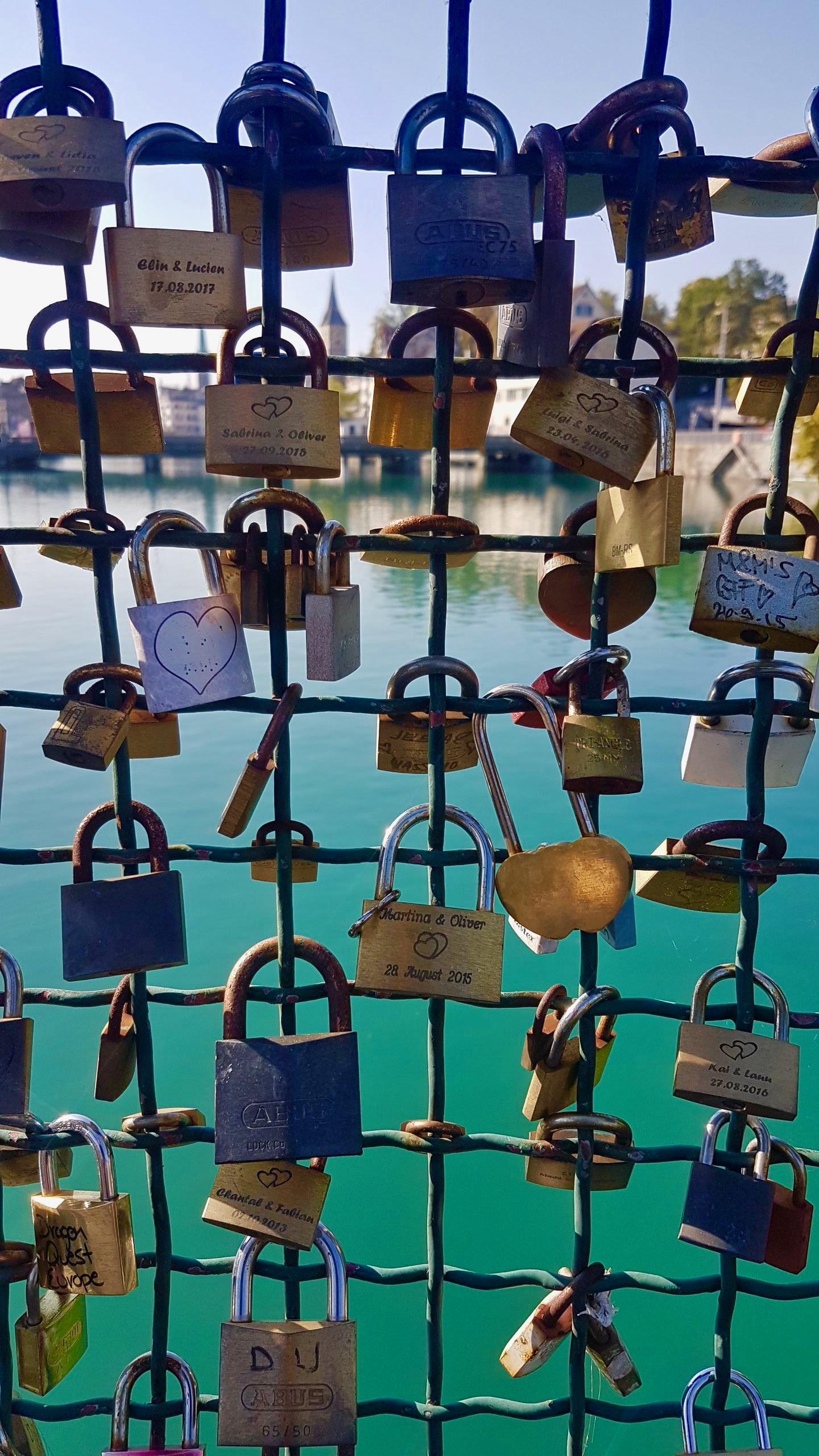 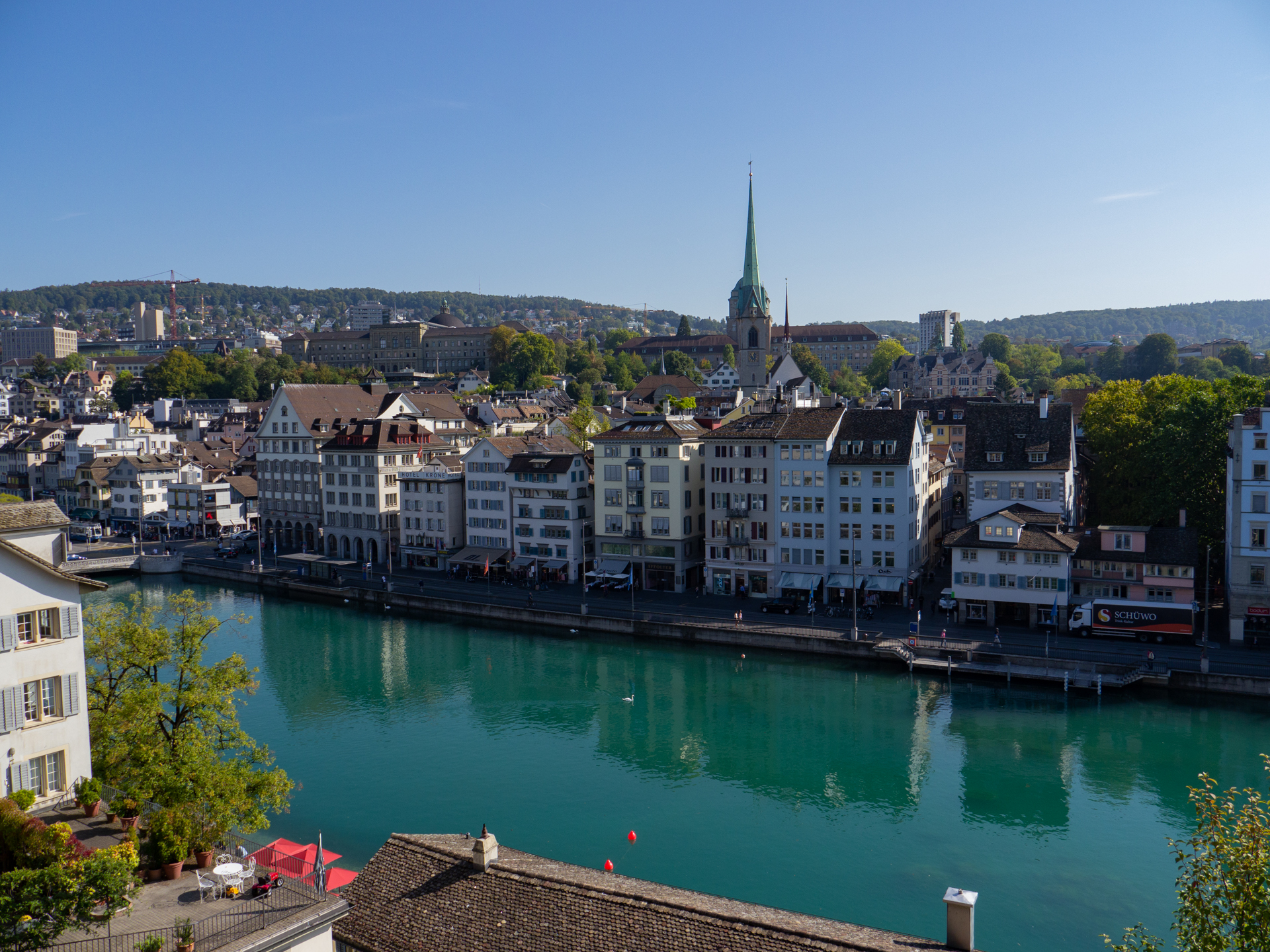 No trip to Zurich would be complete without a trip to the lake, and one of my favourite things about Zurich is that everything is within walking distance, so you’re never too far away. I did see a lot of people taking segways around the lake, which did make me turn slightly green with FOMO, but alas, I opted for two legs. This huge expanse of water can be seen from space – okay, no it can’t but it is 25 miles long, which is pretty impressive! What used to be a bit of a highway for transport into the city is now a calm and relaxing haven for those looking to get out of the city for the day. We sat down by the glistening water late at night near Kilchberg. It was here that my friend started pointing out the side of the lake where all the celebs have their mansions. People go absolutely nuts for the houses there. Hardly surprising though when you consider the location. 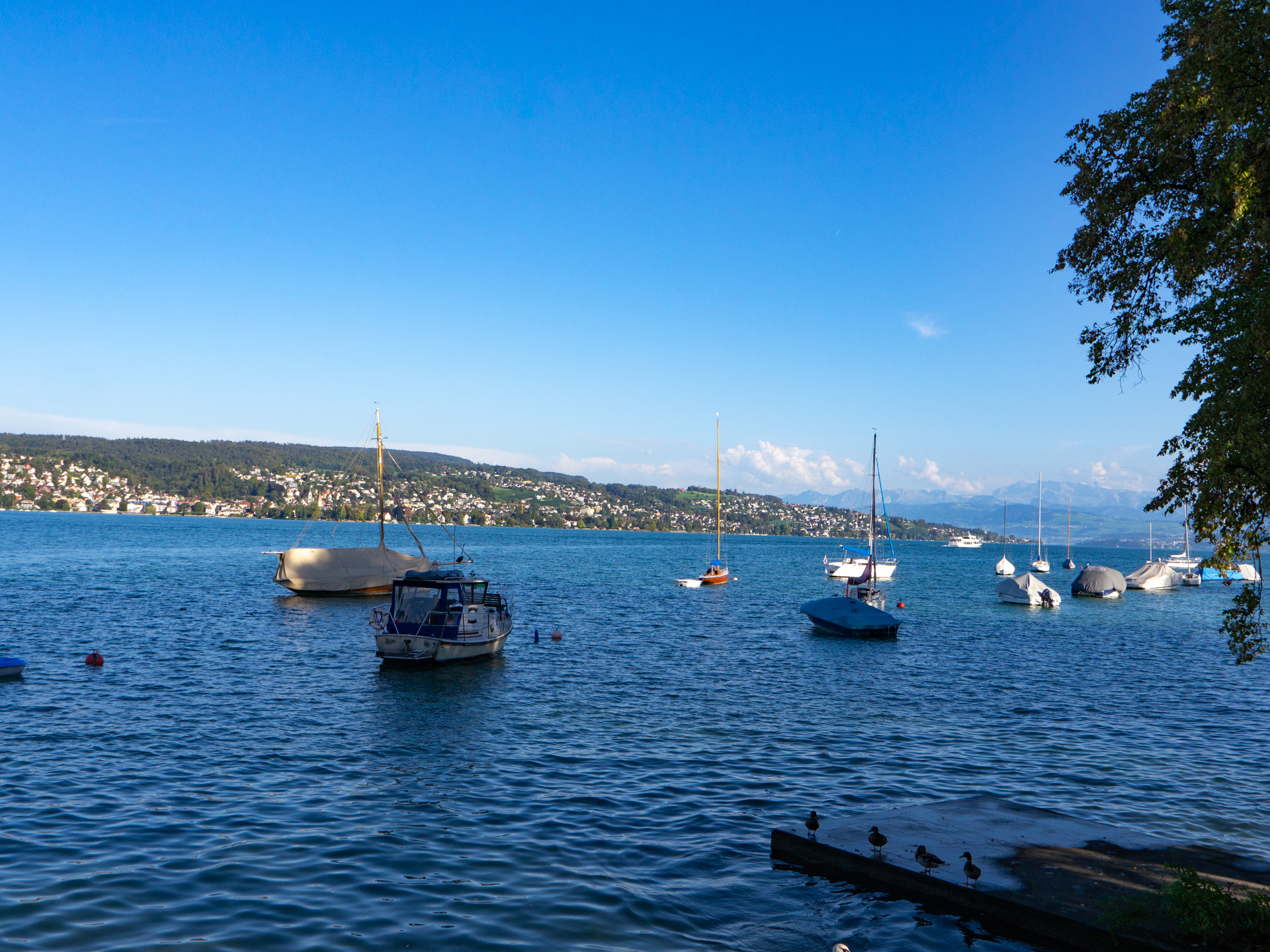 If you want  a panoramic view of the city, head on up to Uetliberg Mountain via the train. The tower is mortifying to be stood on. Vertigo really kicked in for me and I found myself hugging the railings and at one point I ended up crawling on the floor, whilst also holding on to the railings. Classy. 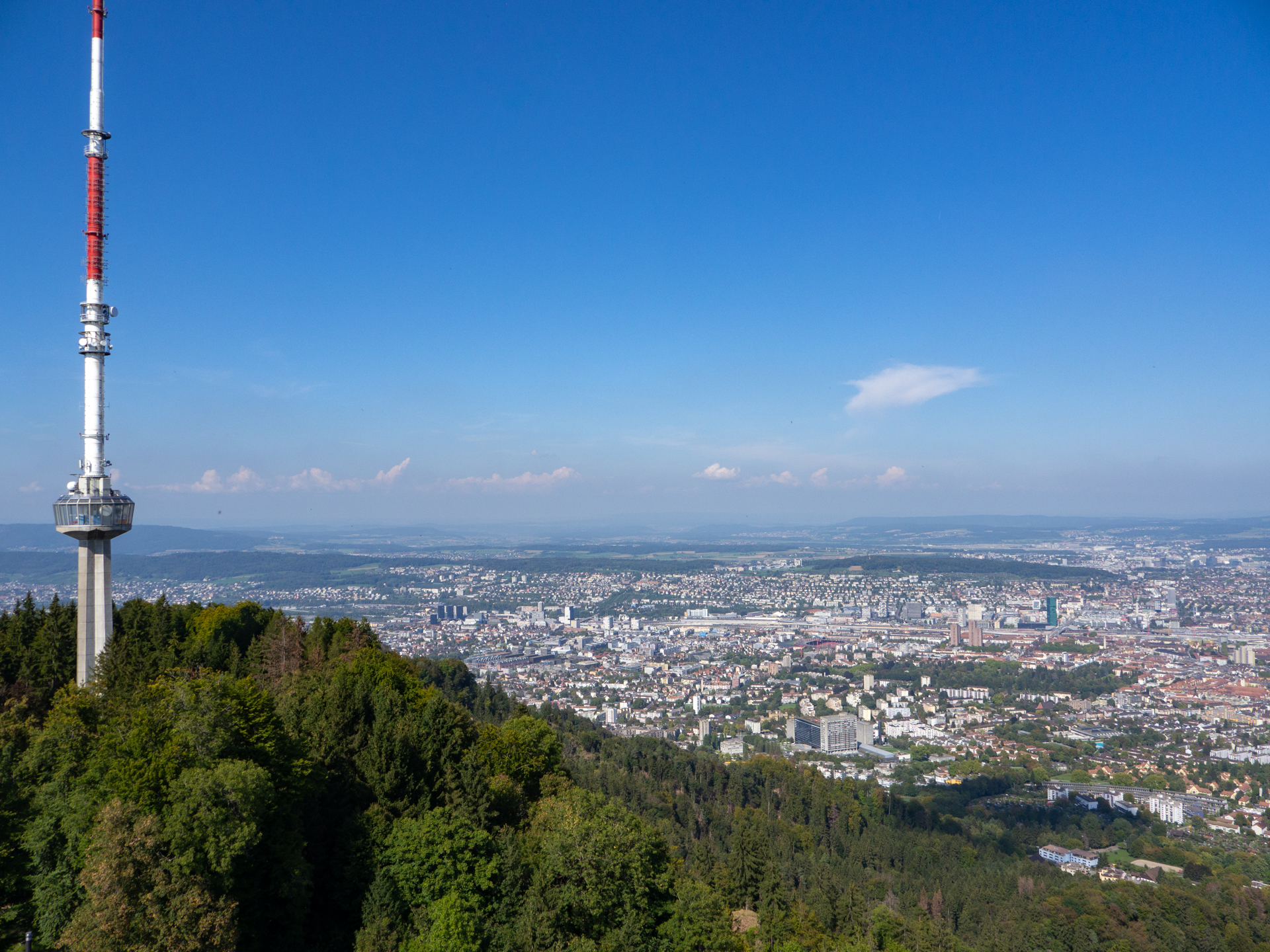 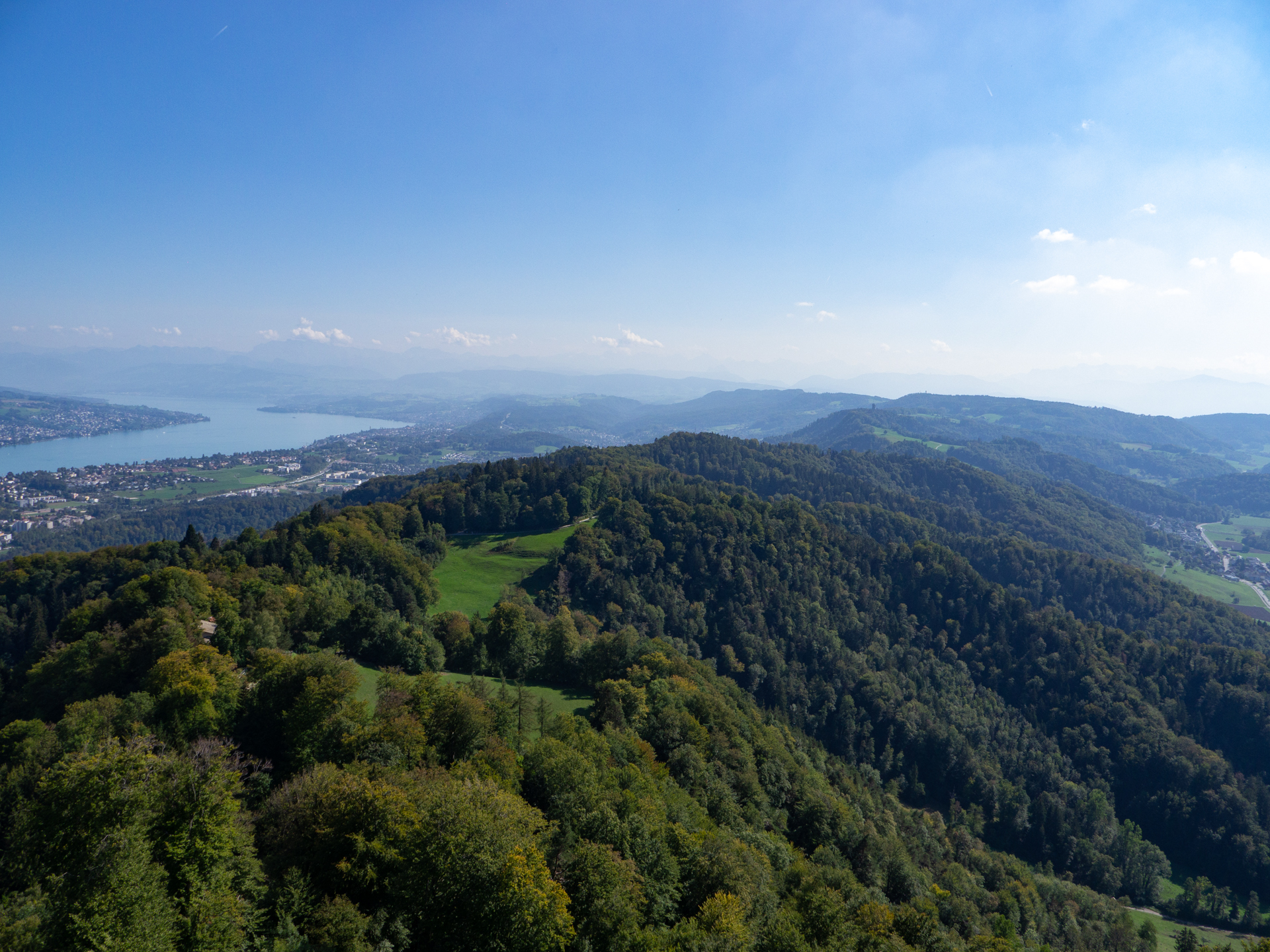 After two beautiful train journeys through the Swiss countryside and a little stroll, we arrived at the Rigi Bahn. I know what you’re thinking. “Taking the train up is cheating”. In my eyes, it wasn’t cheating per say – in the same way that match-fixing and Olympians taking steroids aren’t – (okay, so it might have been) we were just a little strapped for time. This gloriously green peak is at the very heart of Central Switzerland and overlooks the alpine world, with shimmering lakes at its feet in all directions. 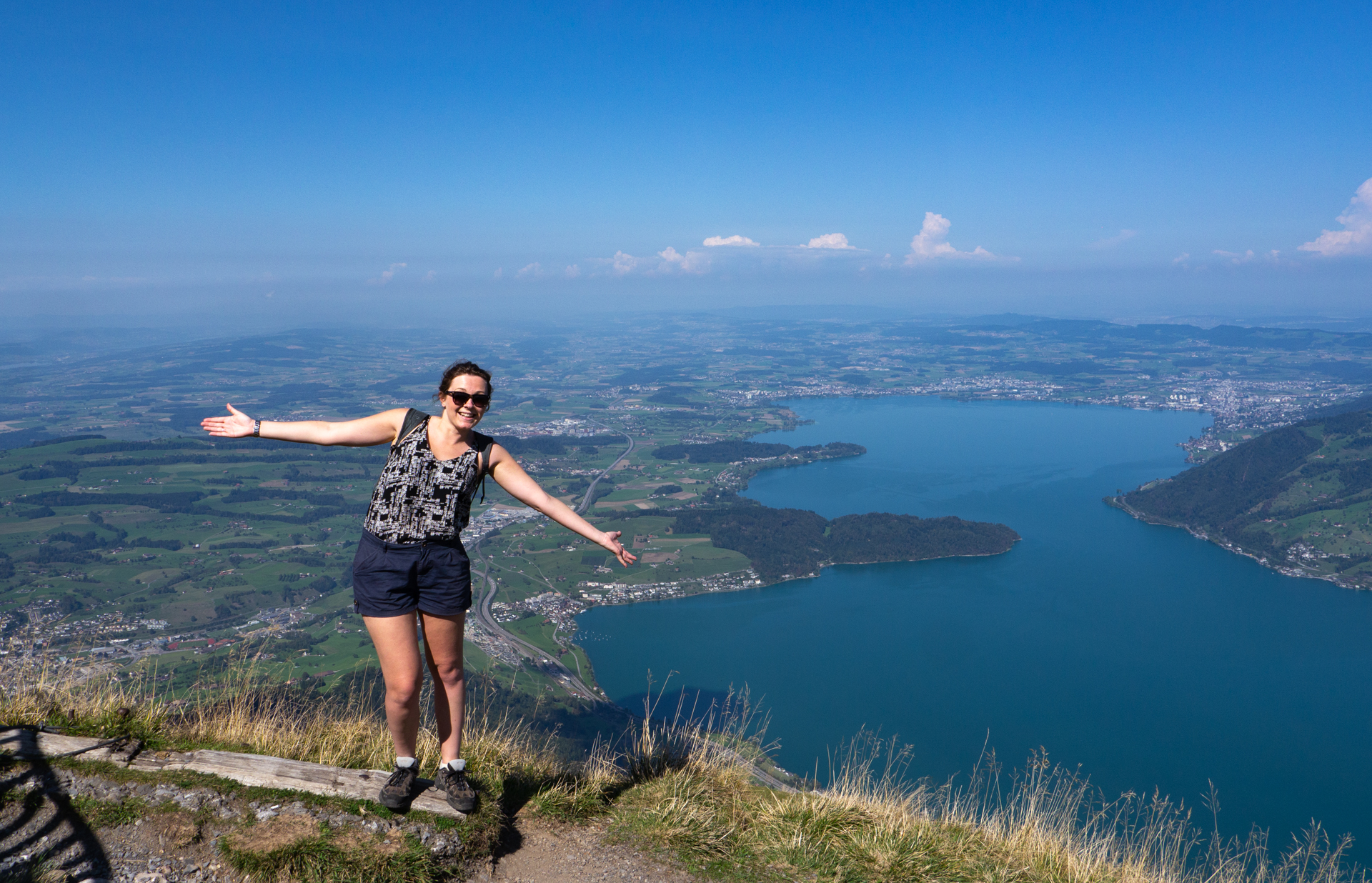 There are a bunch of cafes and stuff (the sign that it’s not a *real* hiker’s mountain) at the top, which are shockingly priced, but we were in it for the views. Amazing, right?! 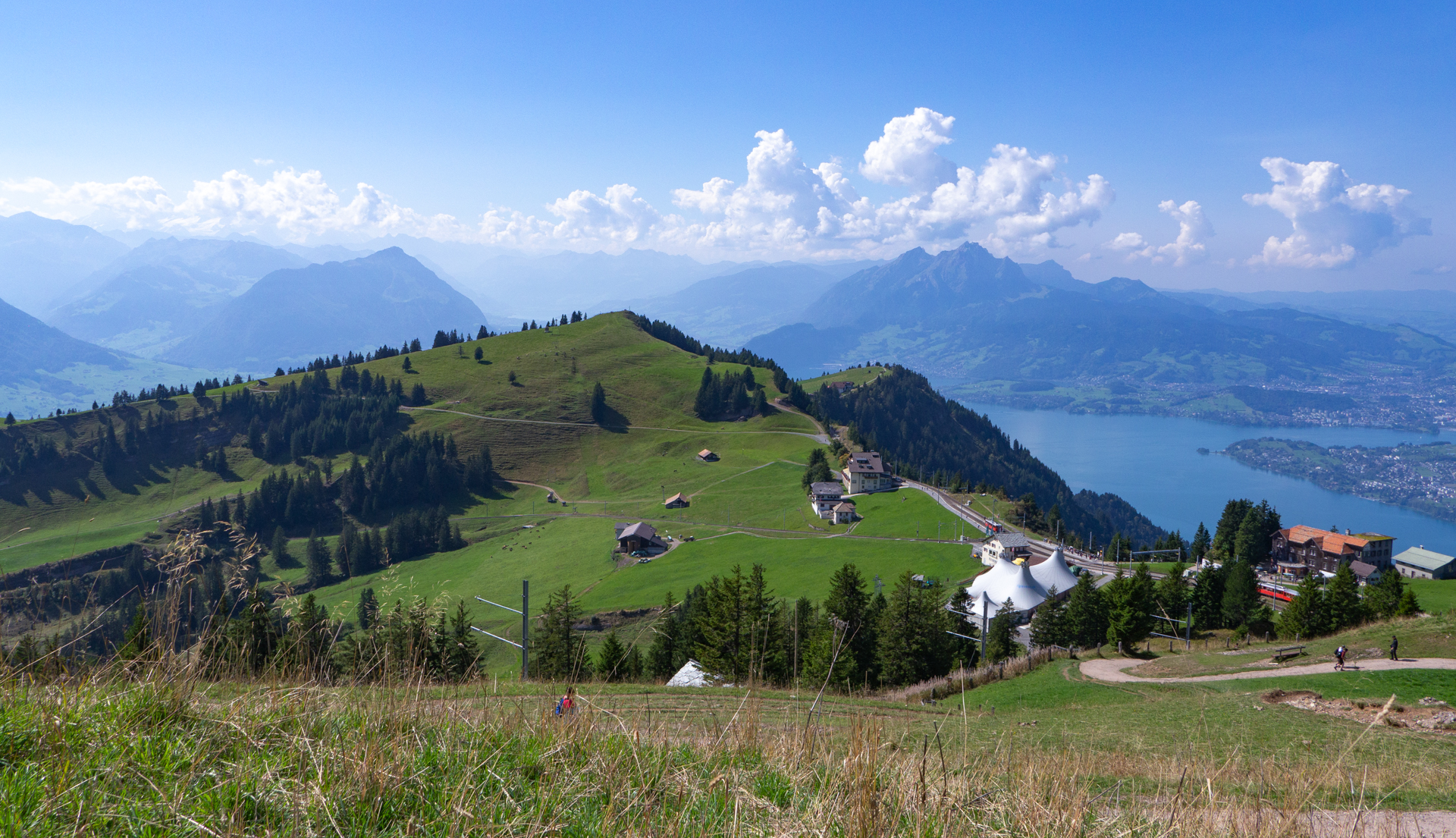 Being up high and looking out over the far reaching terrain kind of made me want to grab the ski goggles and boots, and make a return here over winter. You can just imagine how this might look once it’s been kissed by snow.

We decided that having let the earth carry us up, we should at least walk down. This was of course a terrible idea given the situation with my knee, which has the tendency to lock or give way at its leisure. The hike down was pretty special though. Walking through the treeline and out into the alpine hills, I felt a million miles away from the kafuffle of walking out onto King’s Parade on a Saturday morning, which is a fate worse than death in my opinion. 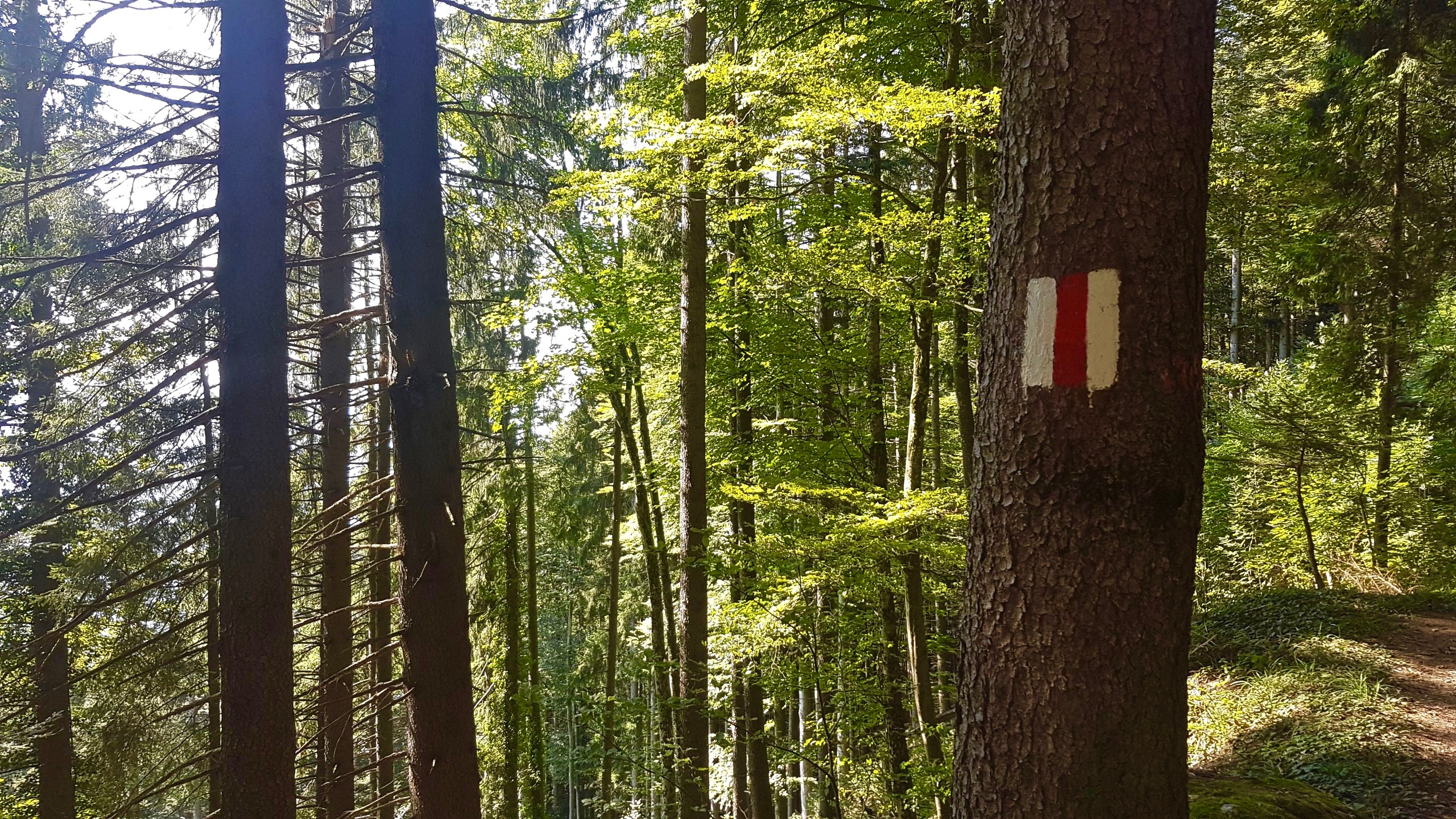 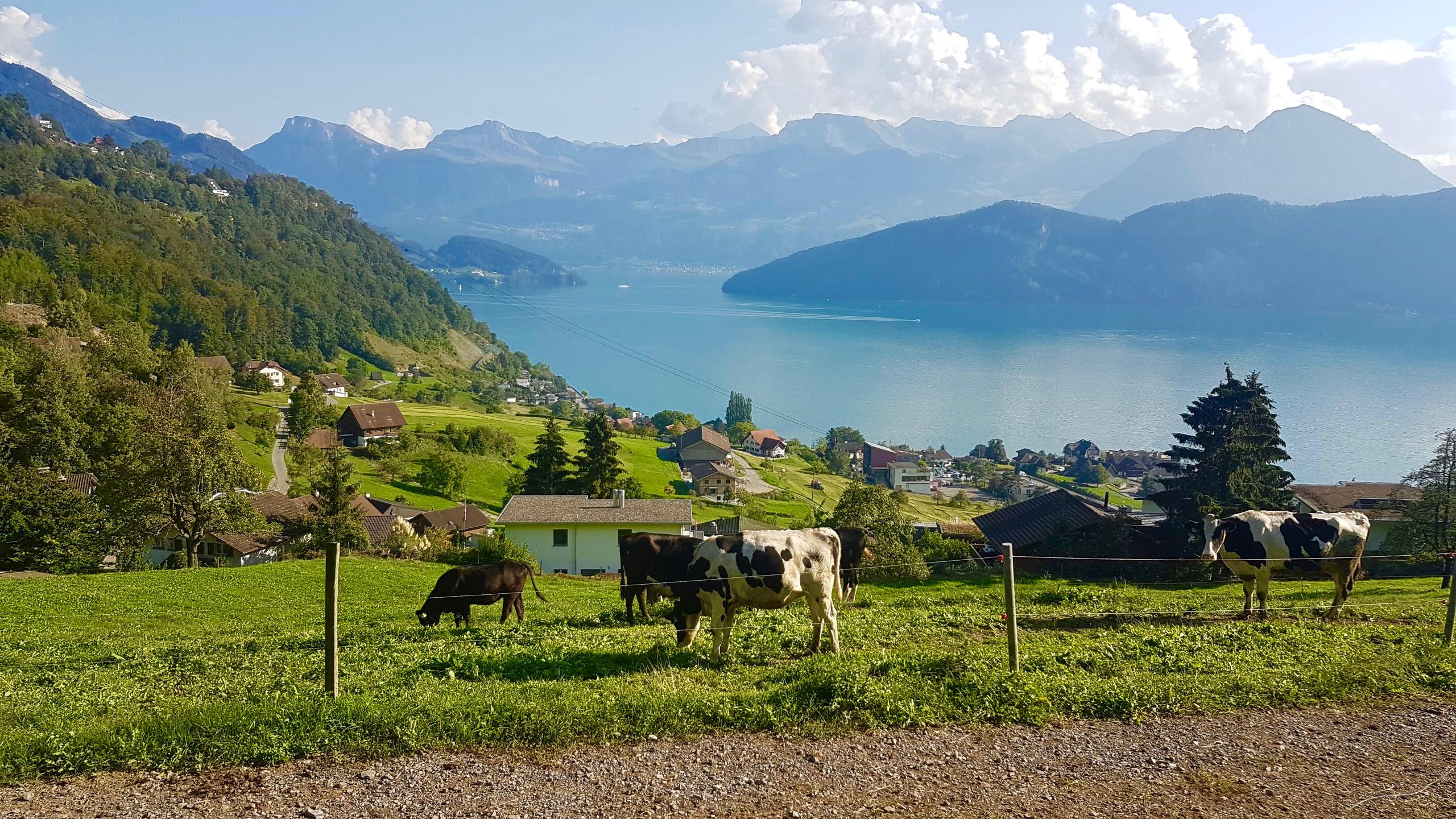 After a few hours of descending, we ended up in Weggis. From here you have a number of options for onward travel, but we decided to head on over to Luzerne via boat. 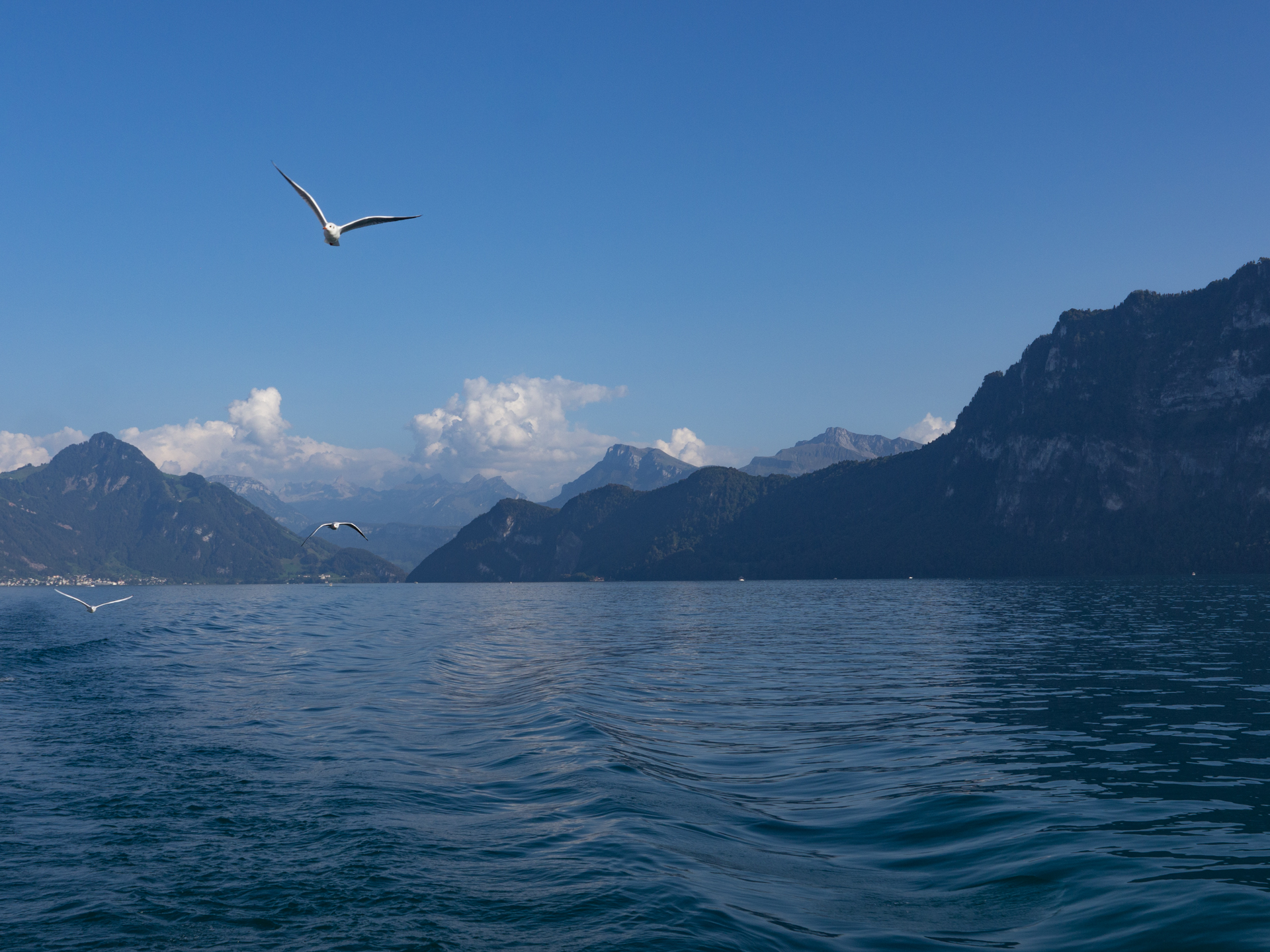 Breezing along the water and taking in the skyline, the journey was nothing short of perfect. Sufficiently sunburnt in true Brit fashion, we docked up and headed straight to Rathaus Brewery for our reward in the form of excessively large beers that would not definitely not be legally served in the UK. Cheers! 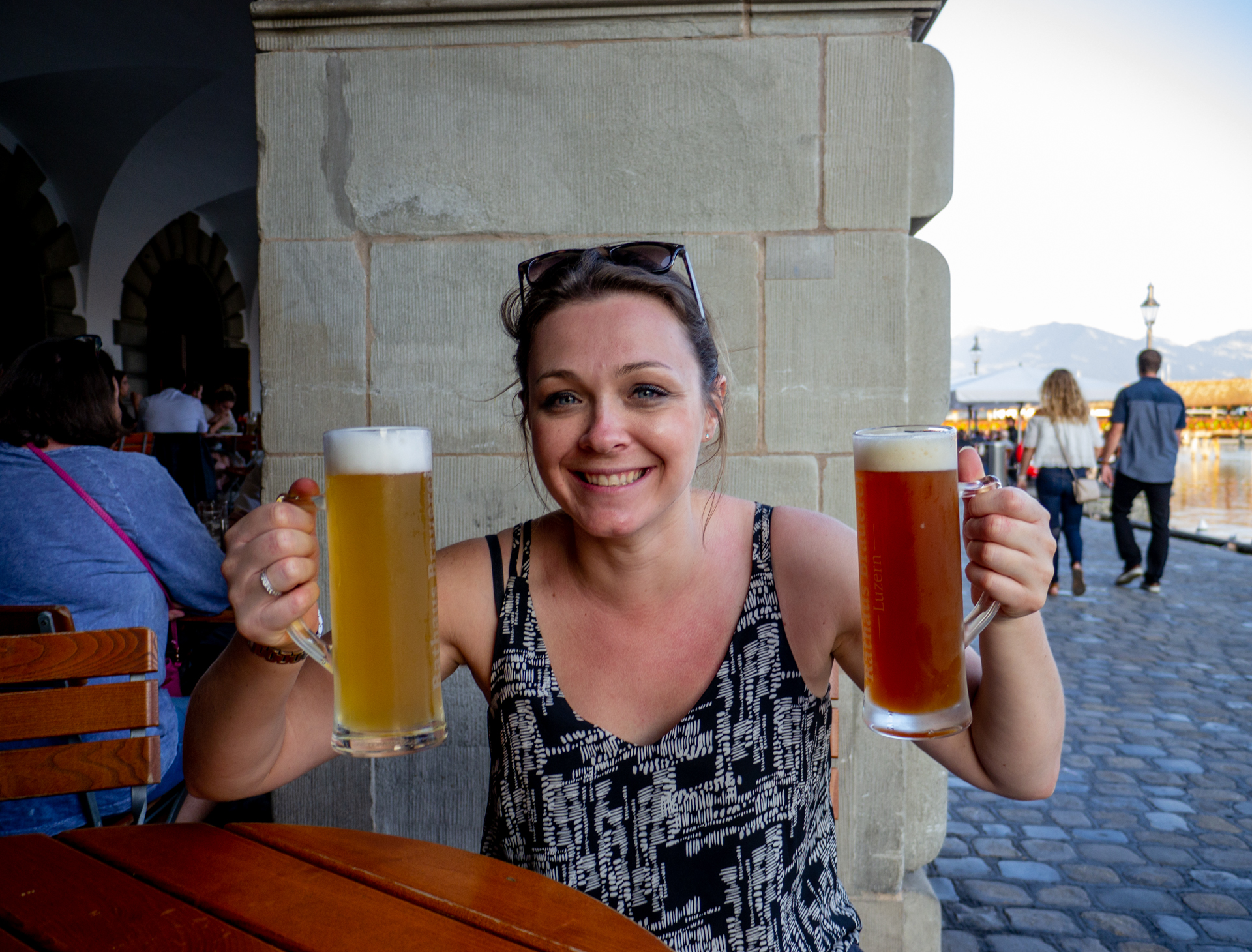 The brewery overlooked was right on the waterfront where we were able to watch the sunset and take a gander along Kapellbrücke. Built c. 1333, it is said to be the oldest truss bridge in the world, and is famous for being burnt to the ground. Looks alright now though, if you ask me… 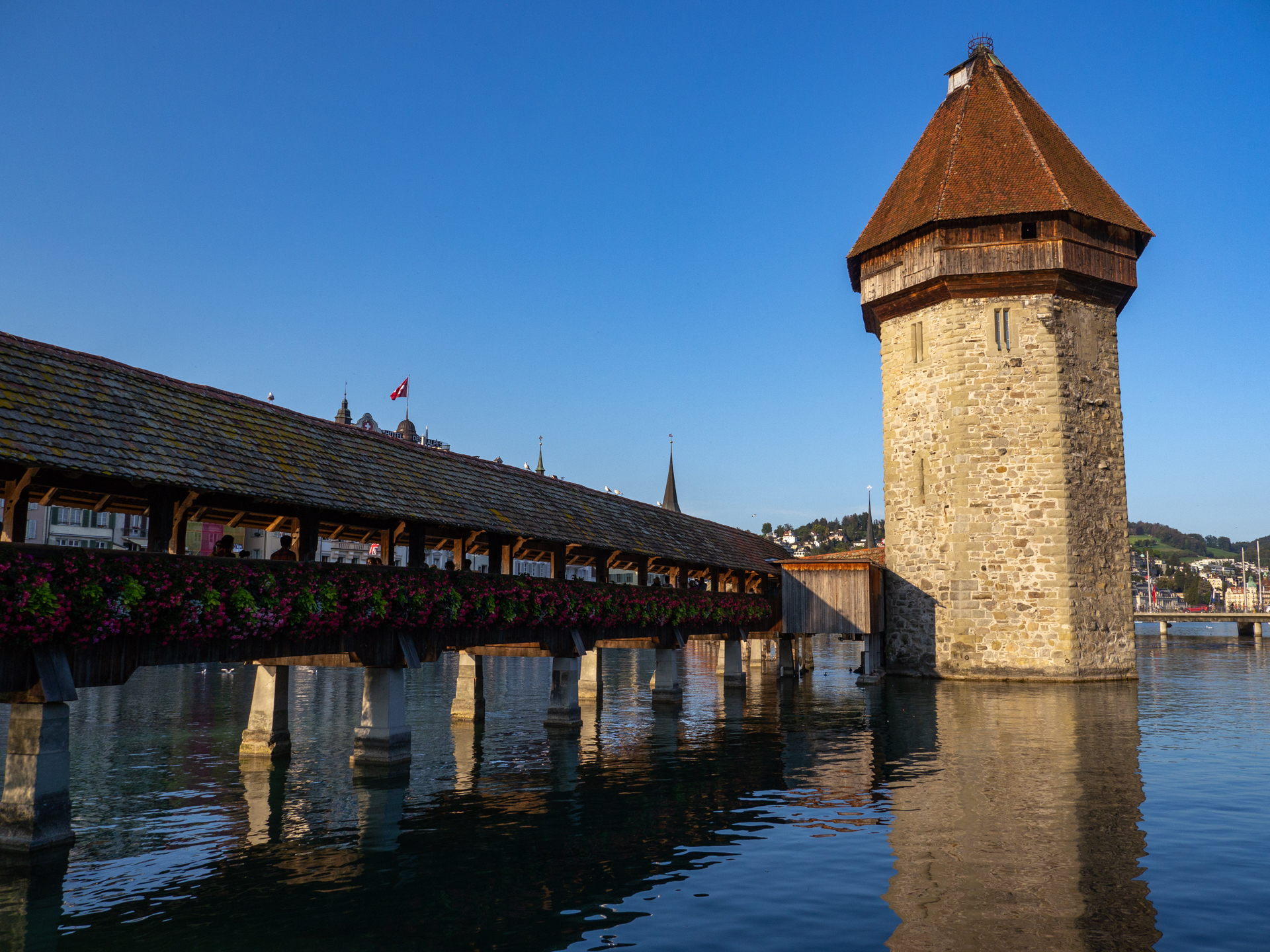 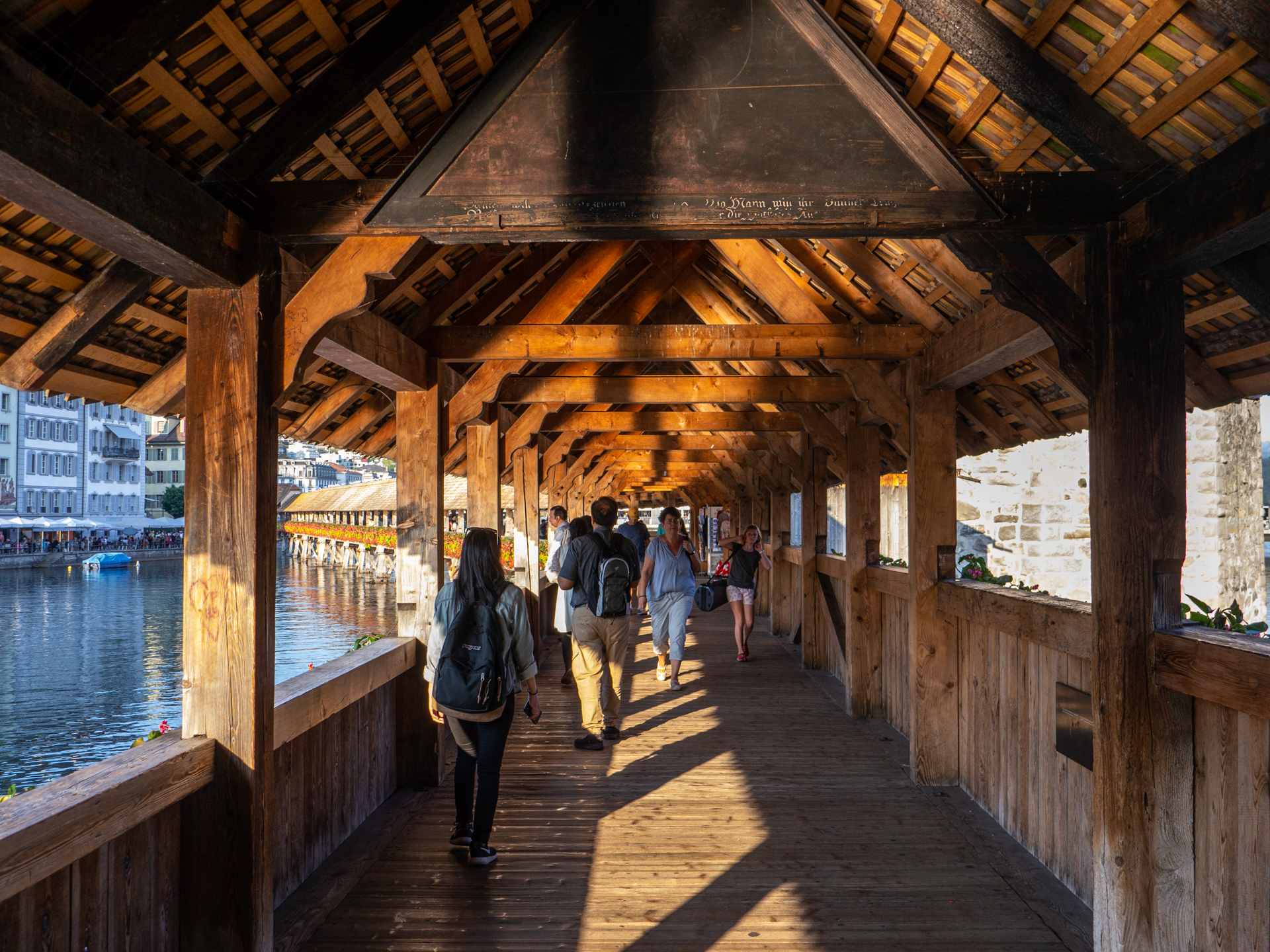 Other than that, I concluded that Bern doesn’t have too much to offer in the way of things to do, unless you like museums, which I really don’t (unless they fall under the category of utterly bizarre – kimchi museum, Iceland phallological museum, I am looking at you). For me it was one of those places you go to absorb the atmosphere and take in the architecture. 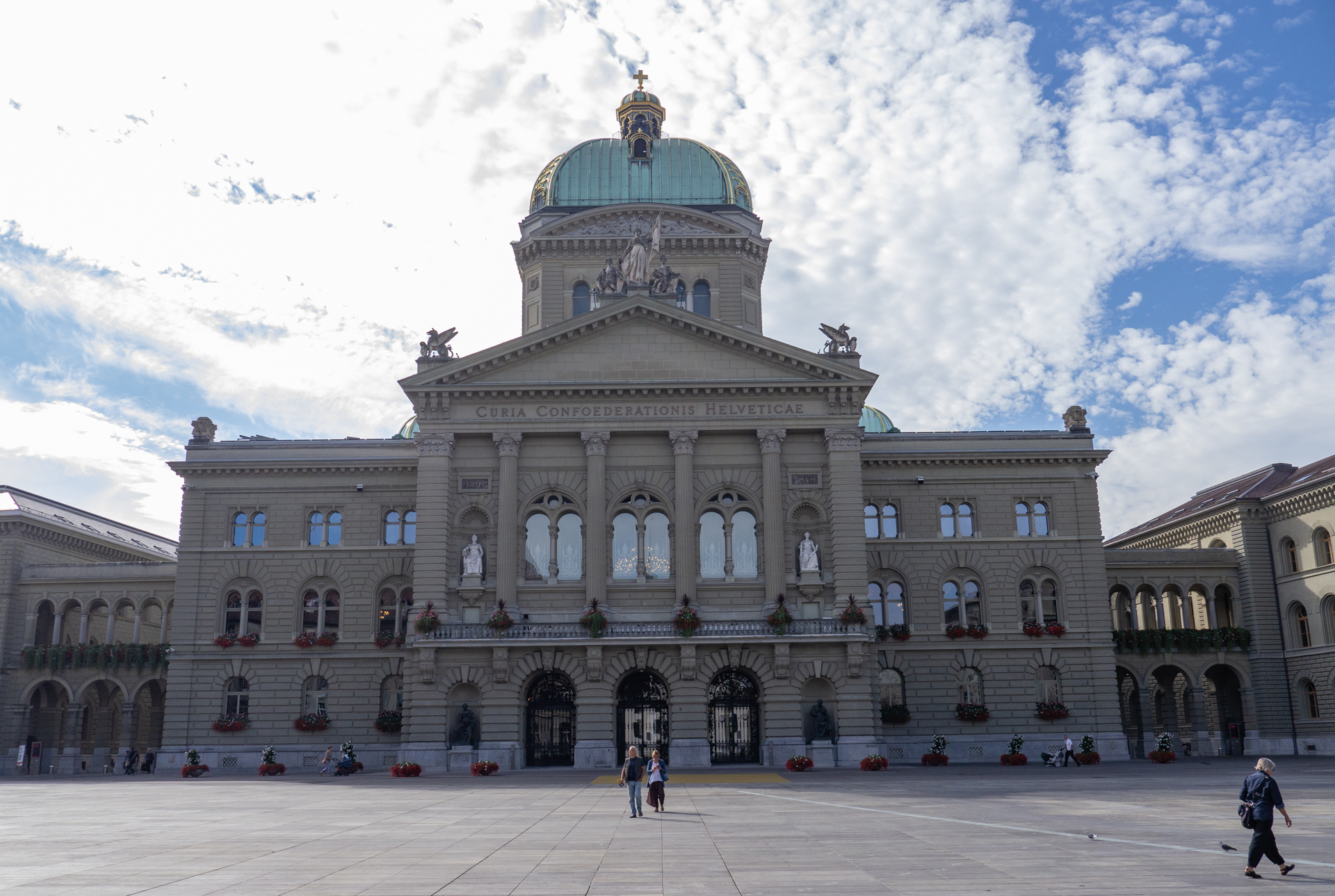 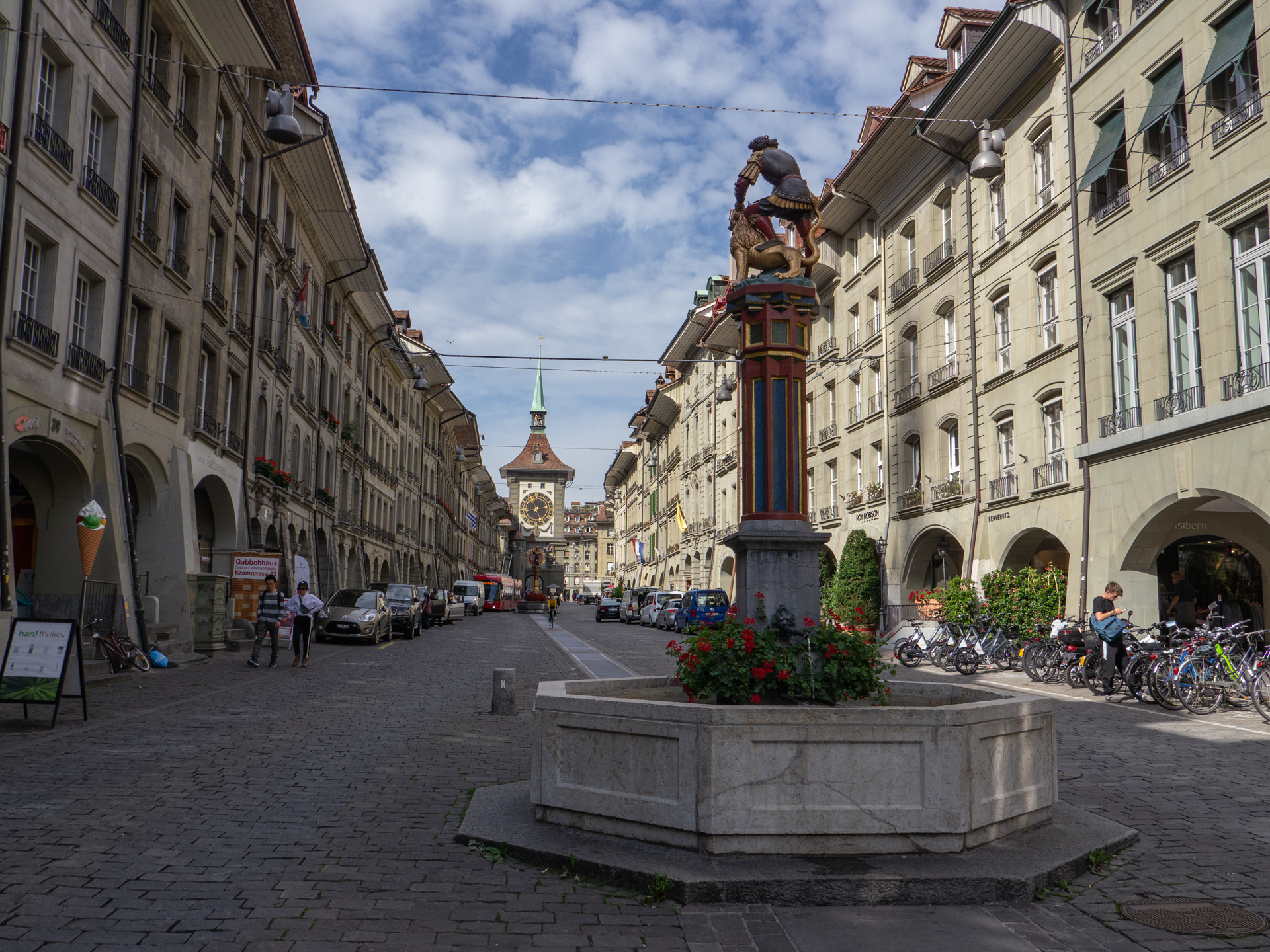 I headed off in search of the best view I could find, which took me towards the ‘tongue-tip’ of the city. It was here that I stumbled across the rose garden, which overlooked Bern in all its gory. 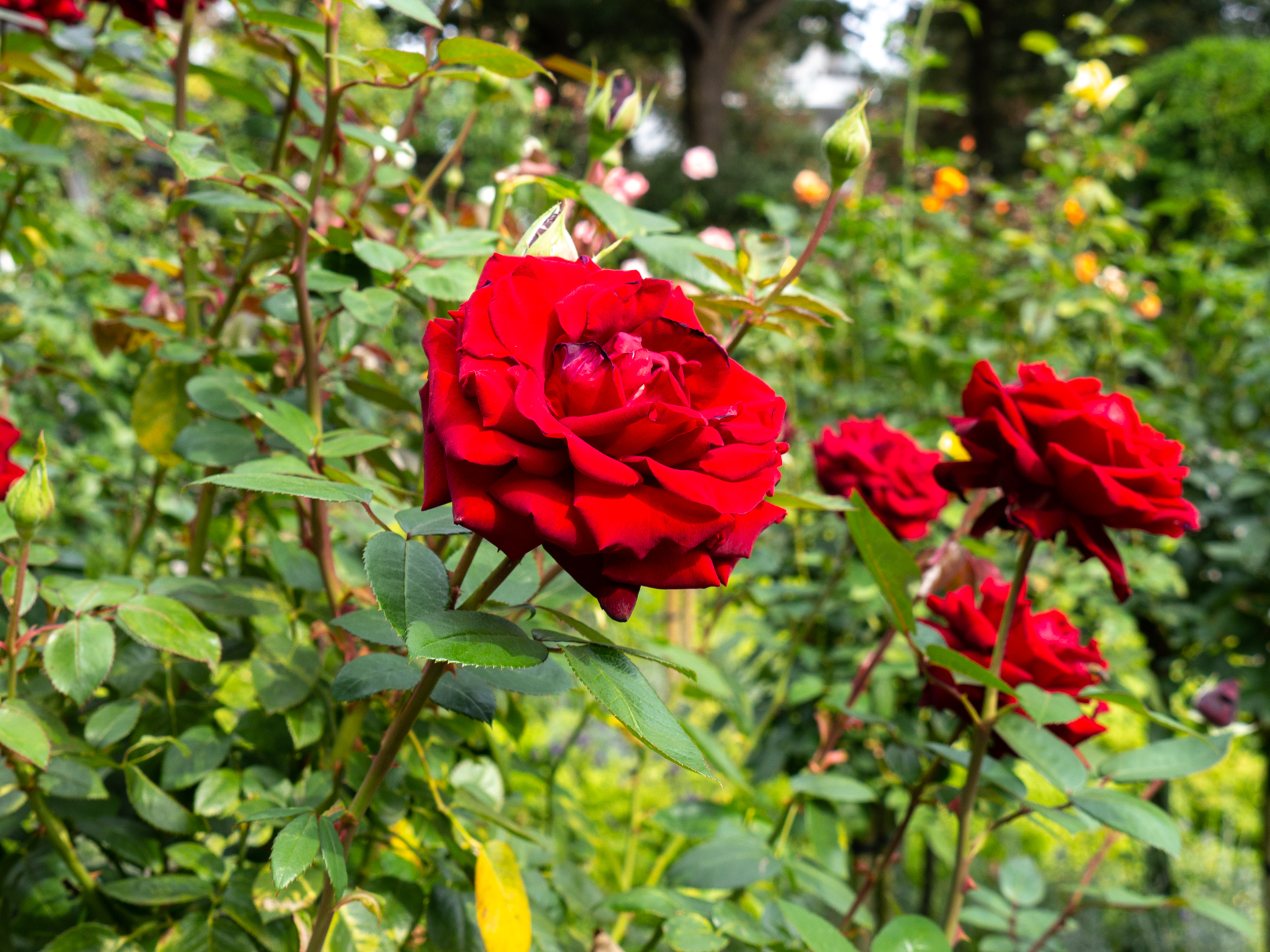 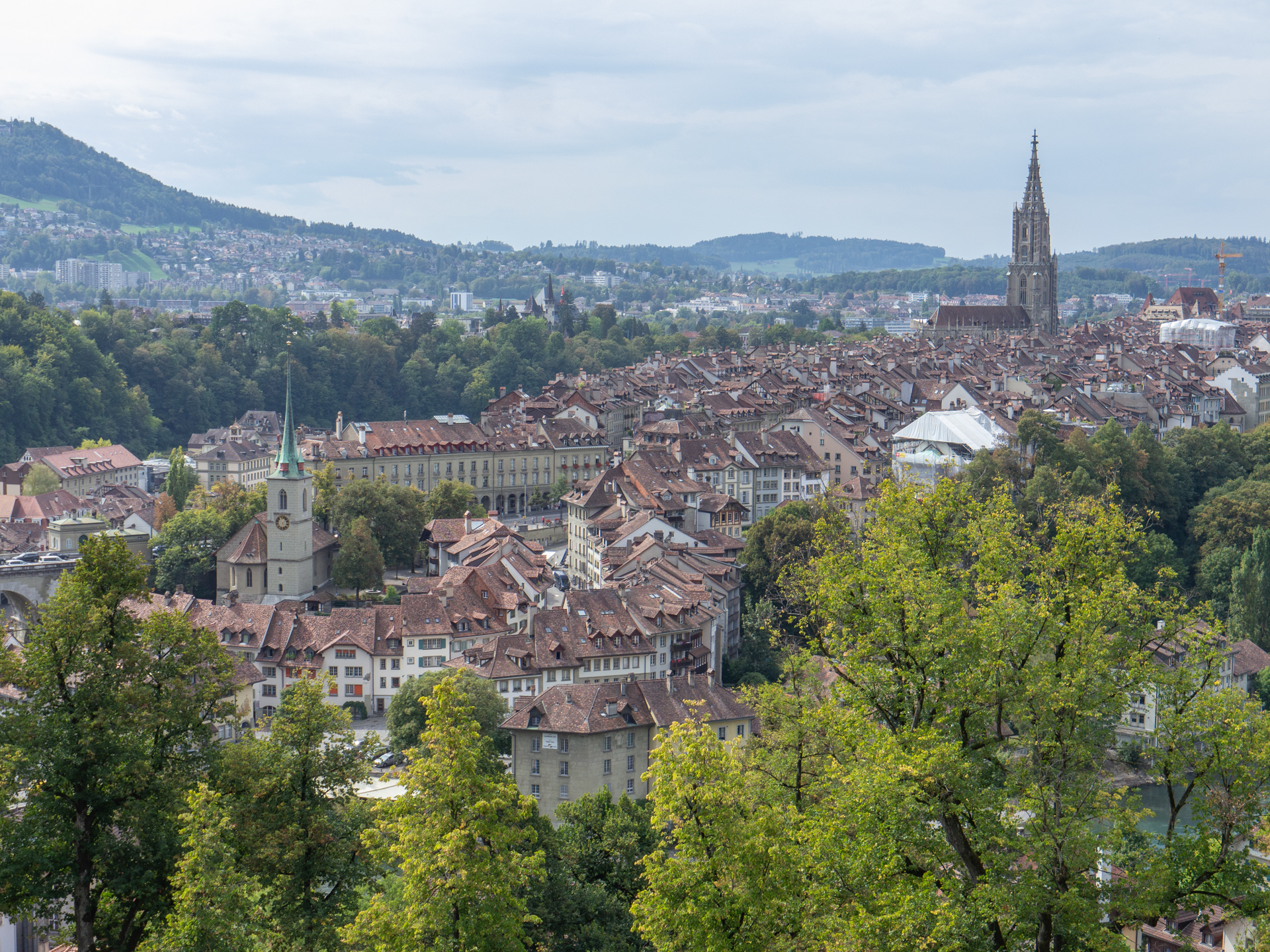 It has to be said that the weather was appalling in that it was freezing cold and there appeared to be some kind of wind tunnel forming in the city, which didn’t make for a great experience of being up high, but all in all, the gardens are well worth a wander and the view from the top is pretty fresh. 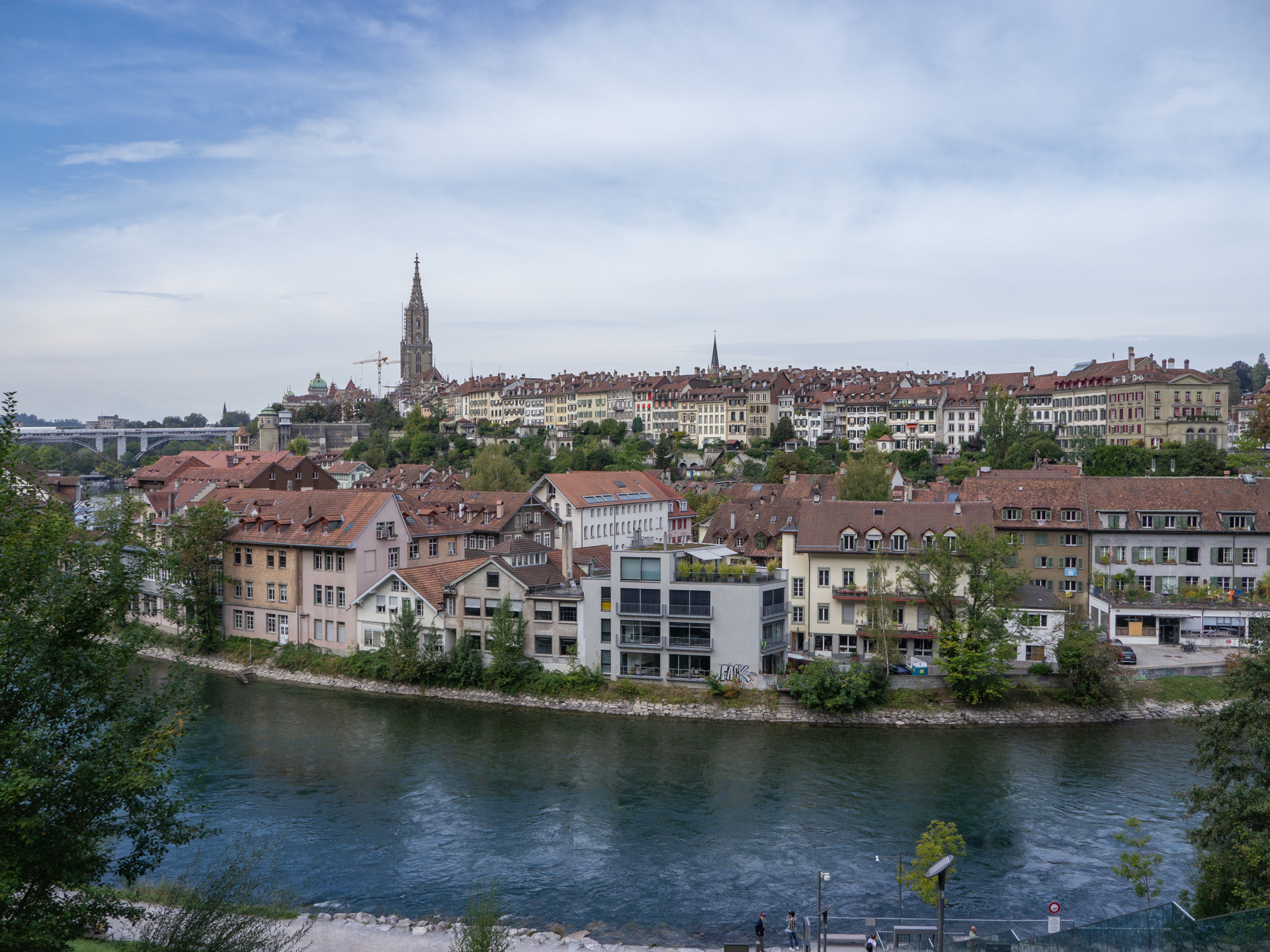 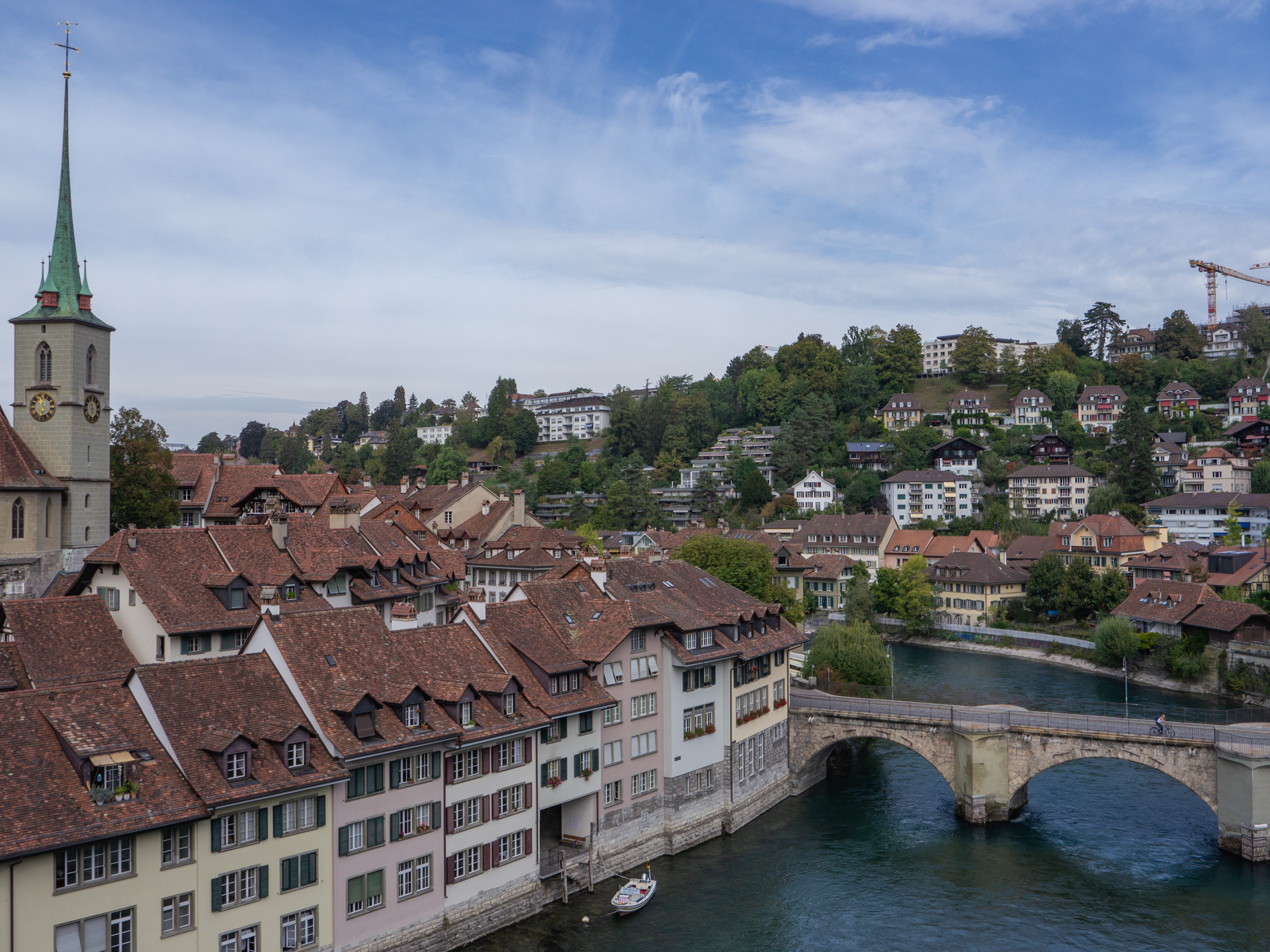 The centrepiece of the city has to be its magnificent cathedral. At first I did a double take as the gothic architecture appeared to be strikingly similar to the King’s College chapel, but I went on to learn that this was built over 400 years later. It’s an impressive architectural feat no less, claiming the title of tallest cathedral in Switzerland! 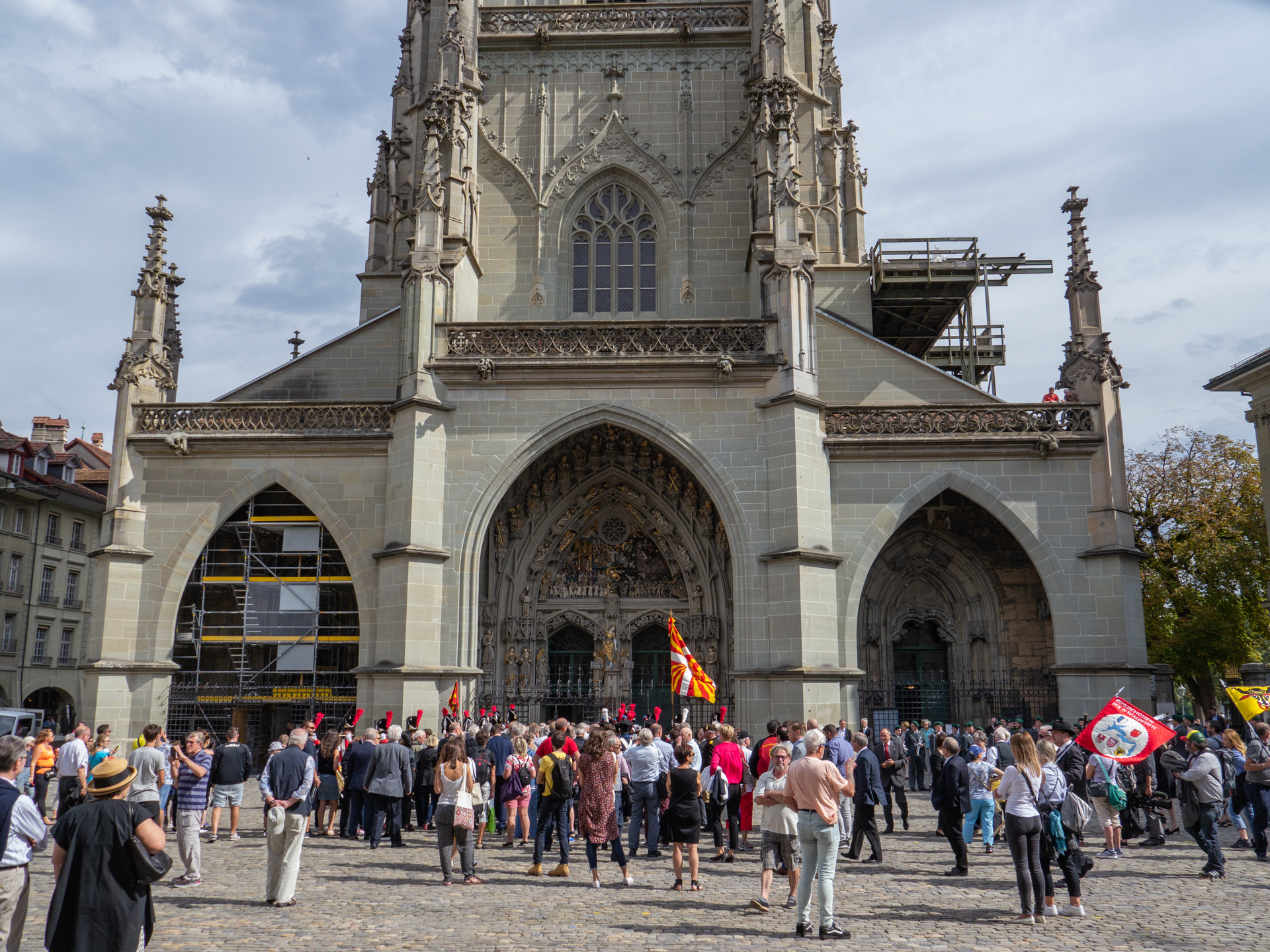 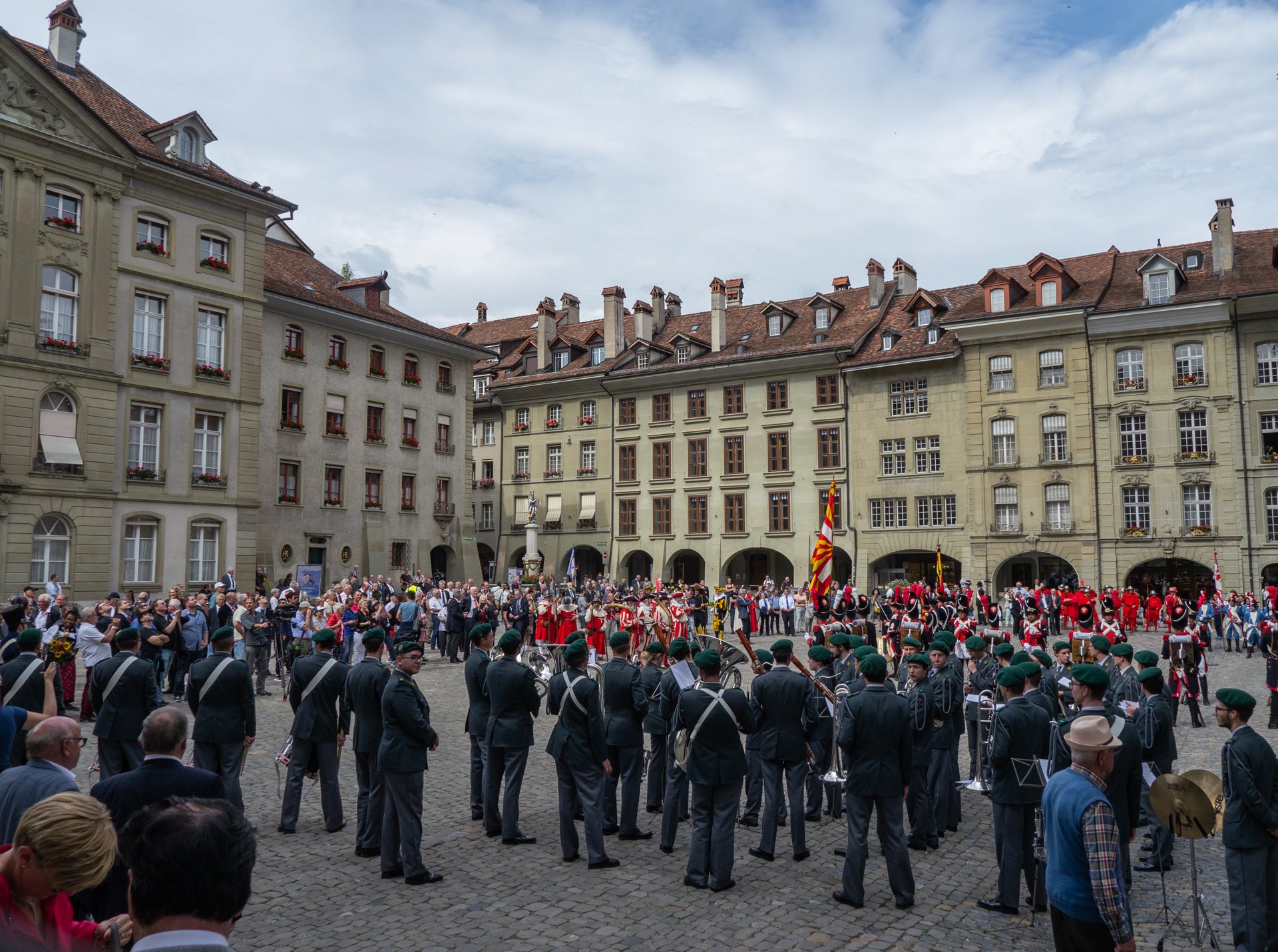 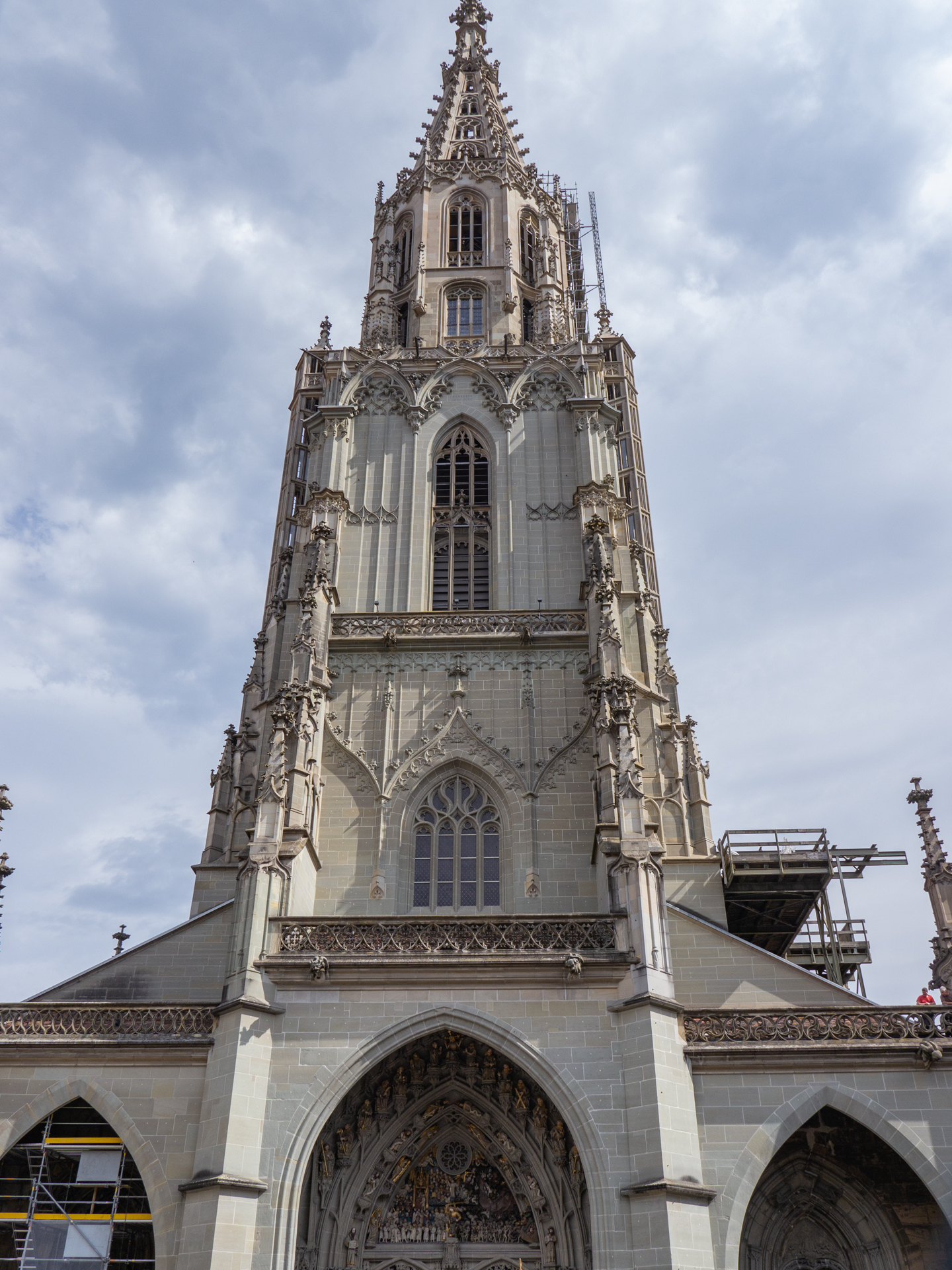 So, what can I say about my whistle-stop tour of Switzerland? Well, I now need to sell a kidney to replenish some of the funds in my bank account after even being charged for tap water! Additionally, I tried hard to practice my German, but everyone ignored me because they only wanted to speak in dialect. However, I can happily say that despite this, I would go back! Whether you’re a city dweller with a love of all things old, or a nature lover looking for your next hike amid the clouds, it’s an utterly spectacular place to be, with something to offer for all. Go Switzerland!